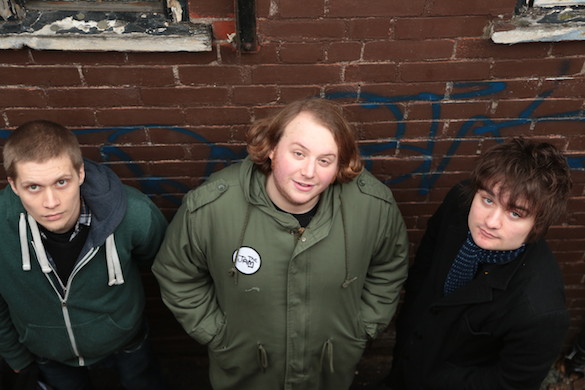 Dirt Royal are from Brighton. They played their first gig over a year ago and with three releases under their belts feature a bright and melodic 60s-influenced mix of mod and punk.

Dirt Royal was created by Charlie Russell (lead vocals/bass also song writer of the band) two years ago in Brighton in Under The Bridge Studios. He asked Loz Hood to play drums, showing him a few demos of song ideas. Loz liked them and was interested in starting something and after a lot of trouble finding people that were suitable, they were lucky finally to meet Leon Fenton (lead vocals/guitar). Leon played a open mic night that the two existing members were at and they were very impressed by his set, so they asked Leon to join and convinced him to be in a band.

Charlie says, “I decided to form Dirt Royal to have a band whose members were very serious and enthusiastic about playing live and writing songs, songs with lyrics that say something important or tell an interesting story with energetic raw but melodic music. Just honest music really.”

Along with their great singles like That Isn’t Me/North Street and Girl in the Shop/Busy Man with true Mod sound and punk energetic attitude the band also have lyrical and tuneful songs like Sob Story and Time Can Be Your Clown, with clear guitar sound and beautiful lyrics.

Louder Than War: What does the name Dirt Royal mean?

Dirt Royal: Dirt Royal is the sound of the band, we have a very raw, angry punk side to our sound which I think is our natural roots all growing up loving punk music. But we also take a lot of influence from old mod and 60s pop music, where its all about the melodies. We try to find a happy medium in all that, which I think Dirt Royal best describes that sound.

Why do you call your music mod/punk?

We believe we have a very punky sound and approach to our live performances. In our time on stage we feel it’s important to play with every bit of energy we have and get people involved and not hold back. The Mod I would say comes with our influence from old mod bands like The Kinks, The Who, The Jam etc. Great edgy melodic songs from those bands. Its not the only music we like but in terms of genre and labels and think that’s the one that makes no sense, I don’t like it when bands refuse to give themselves a genre. Everyone belongs to a genre and takes influence from somewhere.

What does mod music mean for you?

Great edgy, melodic British songs with a lot of style and a positive sense of rebellion.

What bands are you influenced by the most?

The Clash, The Kinks, The Libertines, The Jam, The Housemartins, The Who, The Cribs, Blink 182, The Shirelles.

Mod music was very important in the past in the British culture. Do you think Mod subculture can still be popular among young people nowadays?

Yes, there are still mods out there, some old who are original mods that lived the madness or new young mods that love the music, fashion and respect what a great movement it really is.

What can you say about such bands as The Who and The Jam?

Love them. The Who are so important to music and inspired a lot that has come along since them. The Jam had such a great career, unappreciated in their early days in the punk scene but then they blossomed and wrote so much incredible music. And it adds to the belief that you have never written the best thing your ever going to write, keep writing.

You have three releases already. When your new album will be released?

We have 3 releases in just over a year. First we did a EP with some very rough recordings on and then did a double A side of That Isn’t Me/North Street and then Girl In The Shop/Busy Man (both double singles containing 2 B sides each). Go here to order a CD.

We have our first Album coming out this summer, with some old stuff re recorded and some new stuff. A mixture, we wanted to record more but it wasn’t in the budget but we will save the songs that didn’t make it on the album. We are releasing a album with Time For Action Records, a German label this summer. We are in the process or sorting a lot of things out for it, but we are very excited and are looking forward to releasing it.

You play gigs all around the country. What about your tour this year?

Dirt Royal – We usually play places like The Seven Stars, Hotel Pelliroco, 12 Bar, Riffs Bar, Prince Albert. We are doing a small southern tour at the moment and are in the process of sorting out some other exciting things for the rest of the year.