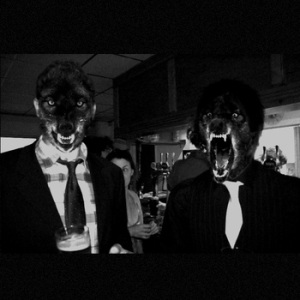 We seem to be writing about musical duos from Derby a fair bit of late – last week it was Ghost Twins and today we’re bringing you Biscuit Mouth.

Any more of this and we’ll have to declare it a genre in its own right, not just a local scene bubbling up with some great sounds.

Anyway, back to Biscuit Mouth.

With a new album to follow later in the year they’ve made single Roll Into the Dancer available for free download.

Over a kick-to-the-ribs riff the vocal manages to sound both feral and jubilant in one holler.

Their debut album, Captain Gregs, Wrapped in Legs, was released in 2013 and the follow up is due later this year.

The former is more of this – slightly incoherent shouting over mathrock beats for a post-rock / new noise sound that benefits from not taking itself too seriously. Roll Into the Dancer leads to high hopes that the second long player will continue triumphantly mining this seam.

Words by Sarah Lay. You can read more from Sarah on her Louder Than War author profile or follow her on Twitter.