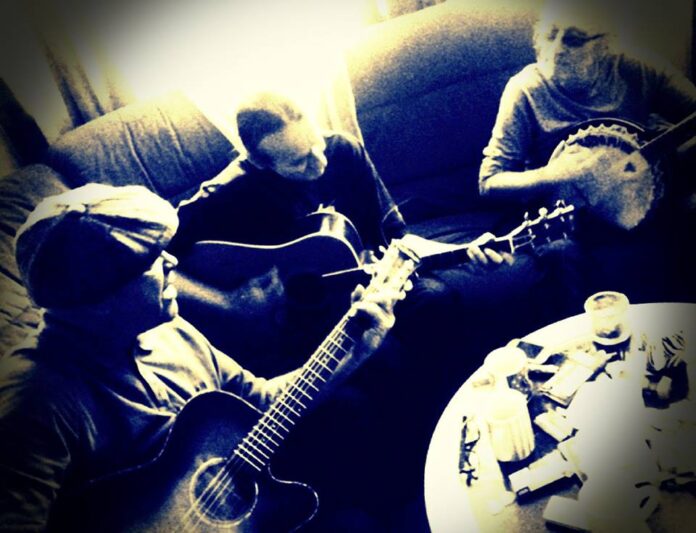 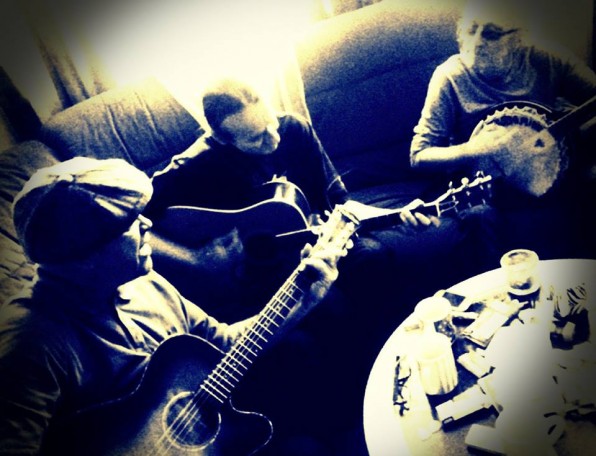 Ged Babey introduces us to Mushami (aka Mush Ami) – a trio of old school punks from Southampton who play acoustic punk-folk as a trio.

Usually you get a CD thru the post or a link to a download to promote and publicise a band. Mushami are no ordinary band though. There are no soundclouds, downloads, youtube videos … nothing. The only way to hear them is to go round their flat or go see them live. Following an invitation, Ged Babey did the former and as such was the first person to see them play prior to their live debut at the Joiners, Southampton on Saturday 12th July. He also interviewed the band while he was there – the results of which you can find below…

“When we were teenagers in the 70s our old dads were at the age we are now, can you imagine them saying “Right I’ve had enough of this, I’m gonna form a band and write some songs that tell the story of my life, of my home-town, all the characters in it and songs that say ‘make a stand’ against this government”? No, you can’t, because it wouldn’t’ve happened, our generation is different, we’re gonna go out fighting…”

Rich Chorley, guitar and lead vocalist of Mushami is 56. A one-time professional Clash ligger, he’s the sort of bloke who has never been overburdened with self-doubt. He has a reputation for not taking shit from anyone and for being someone you don’t want to get on the wrong side of. His Dad was actually a bit of a prankster, one of the first people who started doing crop circles. 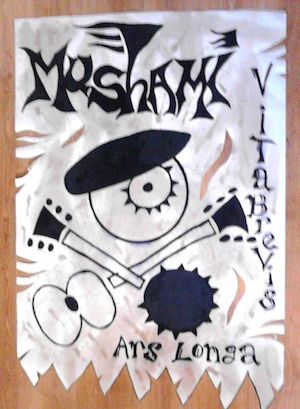 Manny Zorgan, on guitar and backing vocals, is the same age, give or take a year. He seems the most laid-back and has an instantly likeable mush with the complexion of a man who’s spent his life in the pub:

Paul Stratton plays banjo. He could be called the Jones to Rich Chorleys Strummer, he co-writes the songs. He needs a haircut:

“My son is 24, a hairdresser, and he gets embarrassed about me with my long grey hair and takes the piss on Facebook, but all his mates stick up for me and say “No, he’s alright your old man, he don’t give a shit.””

The three of them are Mushami, an acoustic punk-folk trio who are probably the most intense, focussed bunch of old-buggers who ever formed a band at their age.

Part of the impetus for forming the band was the fact that over the past year or so, friends and contemporaries keep shuffling off this mortal coil. Their songs are about their lives, experiences, youth culture, the working class, death, drinking, fighting back, not being ground down by the daily grind, identity, wine, women, punk rock , culture and rebellion … and they’ve only been together for a matter of months. They have twenty songs already and play their debut gig at  Southamptons Joiners on 12th July.

They invited me round their flat where they gave me the first public performance of a batch of their songs. Two acoustic guitars and a ‘ganjo’. Rich singing, no microphone or amps. The absent and occasional fourth member is Paul Simmonds, songwriter and founder member of the Men They Couldn’t Hang, a friend of Mushami from 1977. When he was in Southampton punk band Catch 22, Rich was in rival band the Aborted (and later the Squad, Street Heroes, the Valley Slags…) and Paul Stratton, the Mirrors and Stratejacket for a short while. Manny was in blues bands and plays Hammond as well as guitar. All of them attended “Southampton’s Punk Rock Finishing School” (c) Stuart McGregor, the infamous Bellemoor in Shirley.. 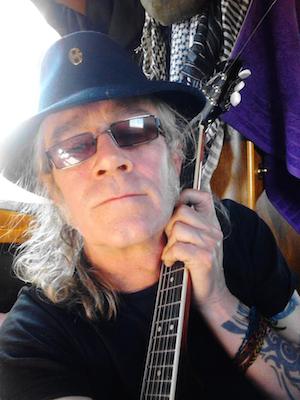 Now I’m not big on folky acoustic stuff but I was blown away at the precision, quality and passion of the songs and playing. A whole lifetime of shared experiences are in those songs. The characters and times are brought to life. The bootboy years, the glam rock days, the punk rock scene, living in a provincial town where boozers and football were rallying points before punk. The song Frankie Fraser Smiles recall times spent at HMP:

Bottles fly, sirens wail, maria’s flood the scene
the judge he shakes his head in shock,
the worst he’s ever seen
take that scum back down the dock,
tie’em hard and fast
three long years for fighting cops,
the gallery stares aghast
seven teenage hooligans, they terrorised the crown
her majesty was not amused, she said send those bastards down

“A rocking little ditty about wandering the hazy, crazy backstreets of Southampton when you decided to recklessly spend your last couple of quid on another drink”.

It’s part social history and part a pub crawl set to music. The only comparison that sprang to mind was Phil Chevrons pre-Pogues band the Radiators for some reason and the sentiment and last-gang feel of ‘Stay Free’.

Hymn To The Mushes closed the set; a song dedicated to local heroes, chancers and legends. The sun streaming through the window made me blink and a tear came to my eye. I was thinking about a deceased mutual friend of ours, Jon Weafer (Rich had written and read a powerful and moving eulogy to him at his funeral some years back). He’d’ve loved that song and would’ve demanded to be the band’s manager (his role in the Boredom City punk scene.)

We chatted for an hour or two about the decline of the pub, how the younger generation, hooked on gaming and the internet, seem to not have any passion for music and politics, about ‘heritage rock’ and how there will never be a youth cult like punk again. The only vague conclusion we reached was that maybe it is 50-somethings still carrying the torch for punk attitude that are going to be the ones who make “great music that means something” and not be sucked into the mainstream and tamed.

The name of the band is a play on a football chant ‘Mush Army’ only changing the military bit to Ami (French for friend).  Intended as one word, MUSHAMI, Facebook insist on it being two, MUSH AMI. Whichever, it’ll sound great as a demand for an encore.

“Paul Simmonds came in to a practice the other day and added mandolin parts to three of the songs, it was brilliant, he’s such a pro he’ll play live with us when he’s available to do so.”

“…but after a few weeks intensive practice, what Rich calls bootcamp, now they’re like this …”

He plays the same tune but now it’s frantic & like a hillbilly Ramones. Reminiscing, Rich talks about his “Road to Damascus” moment, hearing the Jam’s In the City for the first time, reciting the lyrics, he says:

“Yes, that is it, after being a bootboy, a Bowie fan, a football hooligan, doing time, that was it, something that meant something…”

It’s exactly that kind of feeling that three old buggers in their 50s want to recapture with acoustic guitars and banjo … and if I hadn’t seen it with my own eyes and heard it with my own sticky-out ears I wouldn’t’ve believed it possible that they could achieve it.

Despite having a full set of songs, Mushami have no plans to rush into recording an album. They want it to be just right. The whole enterprise they see as a concept; from their anti-technological stance, their artwork; part Solidarity typography, part Clockwork Orange, the autobiographical lyrics; Rich is also writing a book; Searching For My England, and in a way the songs are musical snapshots from the narrative. Mush Ami are very Dexys-like in some respects; A No alcohol rule at practice sessions!

It was great to be the first person to see Mushami play. Rich Chorley and I have always had something of a mutual distrust of each other; I’m a grammar-school boy from Wiltshire, he’s a borstal boy from Southampton; we’ve known of each other for decades but only bump into each other occasionally, the last time was at the General Hospital Oncology department where we were both patients). As an artist though I now have a lot of respect for him and his amigos as Mushami are a band who mean what they say, say what they mean and tell it like it is, and was, with good tunes, and passion; always in fashion.

Imagine the sentiments and essence of ‘Stay Free’ extended into an albums-worth of songs, about youth, good-times & bad, friendships, scraps, played by a folk-band of grand-dads still infused with the fire and anger of punk, and that’s Mushami.

Tickets for the live debut on Saturday 12th July at the Joiners in Southampton are £5 and can be bought from Joiners Website. And look out for their ‘battle-banner’ at Tolpuddle Festival the following weekend on the Sunday.