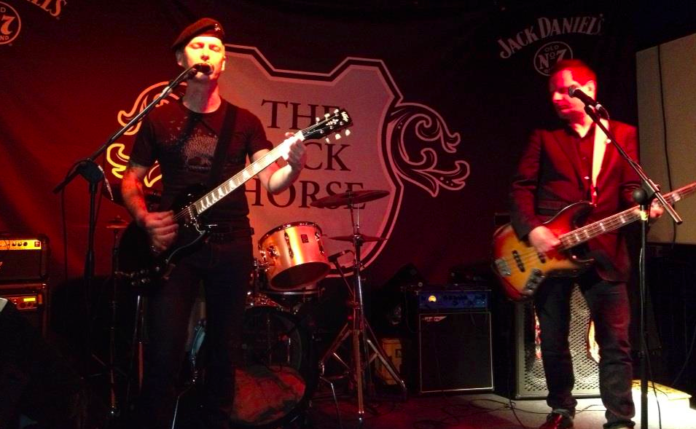 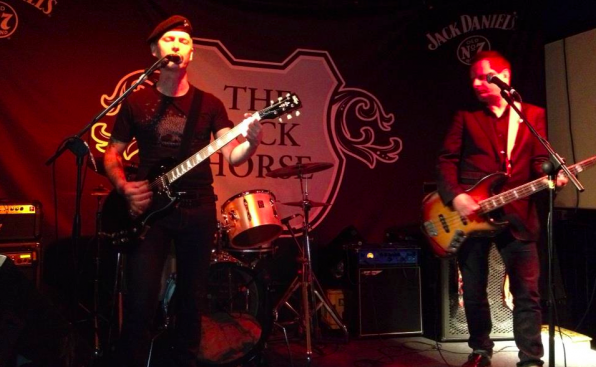 The English post punk band The Lost Souls from Leeds formed in 2011 and play original songs written by the band members Adrian Payne (guitar and vocals) and Patrick Hooson (bass and backing vocals). Heavily influenced by the post punk of the late 70s and early 80s, inspirited by Joy Division, Gang Of Four, Siouxsie and The Clash, The Lost Soul has their own blazing and outstanding sound.

Talking about background behind The Lost Souls, Adrian Payne the guitarist and Patrick the bass player played both numerous bands over the years with some great gig behind them. Patrick Hooson supported the late great Joe Strummer back in 1988.

‘I have been in bands since about 1984 always playing post punk/goth type music’, says bass guitarist Patrick Hooson. ‘The first band was called Fear of Fun and was myself a guitarist/singer and a drum machine. Memories Of Arian was the next band formed in 1985. This was a full band line up with bass, guitar, drums, keyboards and vocals. We only played a handful of gigs, it was around the time when the goth scene was really beginning to pick up in Leeds with The Sisters Of Mercy leading the way.”

The next serious band called Tapestry Sky was the one that supported Joe Strummer on 13th July 1988 on the first date of his Rock Against The Rich tour at Leeds Irish Centre.

‘We had been chosen to play this date after sending a demo to the promoters which Joe liked enough to invite us to play the gig. It was fantastic meeting Joe backstage before and after the gig, he was such a nice genuine bloke who was genuinely interested in what we had to say’, Patrick says.

Talking about The Clash, Patrick shares his memories, – ‘They were a band who we absolutely adored, seeing them live as a young punk was a life changing experience. You felt as if they were there for you and were giving you the belief to question the system and what life had to offer. I still feel the same to this day as I did about The Clash back in 78/79’.

Tapestry Sky also played gigs at Dingwalls venue in Camden Town (an old classic venue where all the old punk bands played including The Ramones). After Tapestry Sky was disbanded in 1989 Patrick formed a new band called Pure with the rhythm guitarist from Tapestry Sky, there they played indie style music but still kept the hard edge guitars, playing all around the country, in Manchester at the Roadhouse and the Swan in Fulham with many local gigs.

Later on Patrick played mainly 80’s synth orientated indie music with his next band called Glide, while Adrian was playing in bands in the Cambridge area from the early 80’s. His band What Noise supported The Ruts and The Addicts. 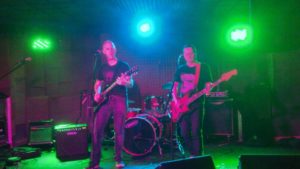 Forming The Lost Souls in 2011 Adrian and Patrick started to write music influenced by music of late 70’s early 80’s.

‘We like the stuff we are producing and accept that it may not be the most fashionable music but we write for ourselves and believe there is a target market and audience for post punk’, The Lost Soul said.

They supported one of the original Leeds post punk bands The Expelaires on numerous occasions since they reformed in 2012. They were signed to a major label and did several John Peel sessions in the early 80’s.

The Lost Soul’s music style is definitely post punk with lyrical, sometimes melancholic songs (Despair or She Tells Herself) with great guitar riffs and energetic sound. The song Johnny Ain’t Coming, written by guitarist Adrian Payne, is beautiful song with a bit of psychedelic guitar theme with meaningful lyrics (the song is about the slaughter of young soldiers during the First World War.)

‘Bands such as Joy Division, Gang of Four and Siouxsie and The Banshees were part of our youth, we grew up listening to these bands and going to see them. Our style of music I guess does owe a lot to Joy Division. We feel that post punk was an important time for music, bands were experimenting with a fusion of different sounds moving away from the traditional 3 chord punk songs’, The Lost Souls say. Their song Doing The 101 is about Joe Strummer when he was leaving the 101er’s to join The Clash.

‘I met Joe a couple of times after supporting him back in 1988, he played at The Town and Country Club in Leeds in 1999 and after the gig he invited us backstage, I can’t say he was a friend but like I say he was a true gent and was genuinely interested in what people had to say. He even let me belt out a rather drunken version of White Riot on his acoustic guitar,’ Patrick tells.

The Lost Souls will release their recordings this year which will be also available for download. They are going to have gigs around UK this year and will be supporting Expelaires on 24th January at Holbeck Social Club in Leeds with The Wind Up Birds and Hands Of Industry.