Home Music Bands New Artist Of The Day: The Guilt 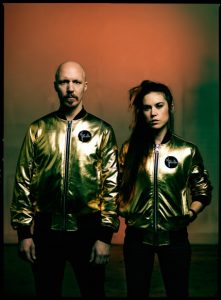 “If I can dance, it’s not my revolution” – Emma Goldman.

Swedish two-piece ‘The Guilt’ formed in 2012 in Helsinborg, Sweden, and have released one eponymous ep to date, and are about to unleash their debut album ‘The Guilt’ this May.

Having already heard the album, and indeed keeping it on loop in the car, much to the annoyance of my school-run passengers, The Guilt blare out of the stereo coming across like the demented love child of early Le Tigre and The Faint.

Vocalist Emma has a vitriolic sounding growl that sounds like an angrier Kat Bjelland, whilst instrumentalist Tobias machine guns out their ‘lazerpunk’ sounds that are both violent yet extraordinarily danceable [again, much to the chagrin of my school-run passengers who seemingly prefer the idea of school more preferable than the experience of a lazerpunk enticed car crash.

You can download their debut EP  at their Bandcamp page. ( a ‘name your own price’ download), as well as finding out more about the band at their Facebook page.