Home Blogs New Artist Of The Day: The Cundeez 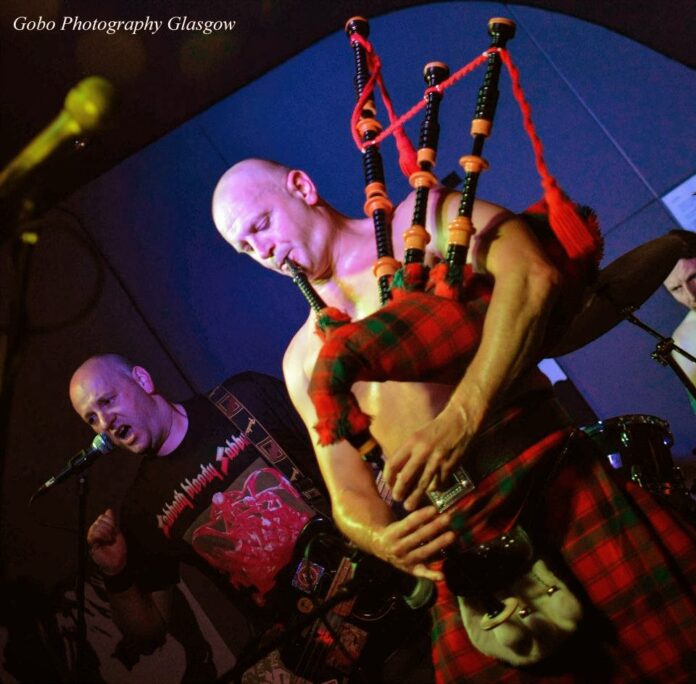 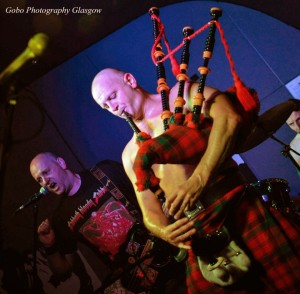 Bagpipes, punk rock and lunatic behaviour, Dundee nutcases The Cundeez are turning heads and not before time. Joe Whyte has the lowdown.

A Cundee, I’m reliably informed by my Dundonian neighbour, is a local term for a drain cover, manhole-type thing. We call it a “stank” in Glasgow.  The Cundeez have been making noises on the punk rock scene in Scotland for some time now. They’re not a new band as such, but following their appearance at Rebellion 2014, it seems prescient to highlight their very singular take on punk rock-meets-Scots folk-meets-ska.

The Cundeez lineup consists of lead singer, piper and songwriter Gary Robertson, Stevie Cundee on bass, Trotsky Cundee on guitars and Tez the Cockney Cundee on drums. They formed in Dundee a few years ago around the idea of putting a single out for Dundee United’s Cup Final appearance that year. Taking Clash-tinged anthems as a starting point and adding Robertson’s clever, thought-provoking lyrics, then melding slashing guitars and the martial sound of bagpipes seems ridiculously obvious on hearing the band. And very, very good.

The lyrics are sang in a broad Dundee brogue with Robertson (who is also a local poet of some note) declaiming the state of the nation in a dialect which is known as “Oary”. If you’re not from the East Coast it may come over slightly like Latin to the ears, but believe me, these guys have something to say and they’re very hard to ignore. “Yir Talkin’ Shite” is fairly easily understood and as a political manifesto, it says what it means. Politicians and bankers take cover. Oh, and you don’t want to be watching this video if you’ve just eaten…

Three albums in and the sound has developed into something quite unique. One could look across the Atlantic at Dropkick Murphys and make some minor comparisons but The Cundeez are less stadium rock and considerably more street. This highlights a possible problem for the band’s future, I reckon; do they go down the route of softening the sound (and particularly the dialect) to appeal to a wider audience?  A certain type of crossover rock/folk is a money-spinner across the globe these days and the whole “heritage” scene in the USA could make these guys comfortably-off gentlemen.  I doubt that’s their shtick, however;  The Cundeez say it like it is and are clearly nobody’s fools.

As regards the songs, on a slightly different vibe from ‘Yir Talkin’ Shite’,  ‘Coloured Ribbons And Tarnished Brass’ (from 2010’s Cundee Radio) is one of the most gorgeous things I’ve heard in a long time. A misty story, half-spoken, about Robertson’s two grandfathers experiences in WW2, it’s simply irresistible in its haunting tones.

Robertson is very much more than your typical punk lyricist; no empty rhetoric or standard old rubbish here. Everything is well-thought out and carefully placed. He’s a funny guy too; lots of witty couplets and smart lines pepper the songs and the band can zip quickly from pummeling power chords to chiming melody in a heartbeat. This is a band destined for bigger and better things.

New single Broo Dog is out now (if I’m not mistaken,this may be a tie-in with local boutique brewing company Brewdog) and there’s a new album expected in October this year. In the meantime, you can download Murder On The Oary Express, Cundee Radio and Lend Wiz Yer Lugz in the usual places.

The Cundeez-  Dundee loons who are Oary Tull Eh Deh (That’s Oary Until I Die, sassenachs).

All words by Joe Whyte. More from Joe can be found at his LTW Author Archive.