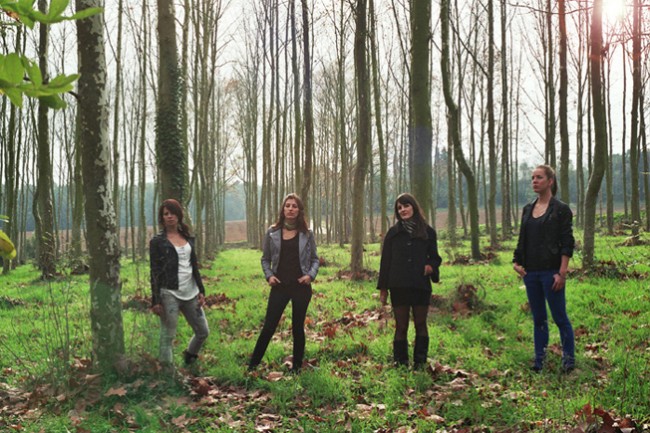 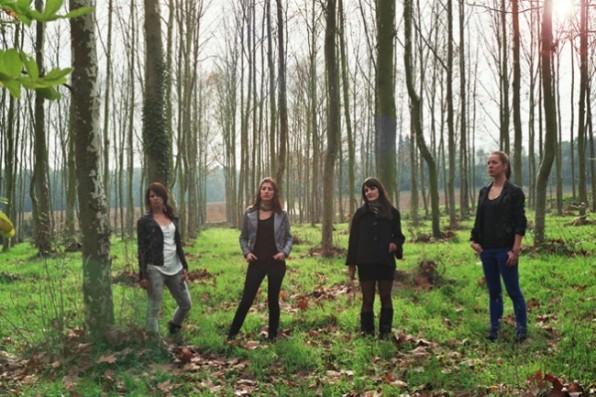 Santa Rita is a four strong Spanish band billed as being in the mould of a riot grrrl meets garage band. Louder Than War’s Melz Durston is a fan and over the last year she’s had occasion to talk to vocalist Natalia. The following piece is based on those conversations.

Barcelona doesn’t just do summer festivals, it is one big festival. With La Rambla and El Born playing host to numerous street performers and musicians – the obscure, fringe and lesser known artists can be heard and appreciated.  Then there’s Sonar, Primavera, Mutuo, Picnik Electronik and about as many others as there are days in the year.

Performing at 2013’s Primavera Sound, were all-girl rock group Santa Rita.  Looking quite comfortable atop a double-decker bus, the band would look equally at home opening for Throwing Muses or Elastica.  Their debut LP High on the Seas was released in 2013 via Bandcamp, a follow up to their self titled EP in 2011.  Santa Rita are:  Natalia Brovedanni, Cecilia Diaz Betz, Laura Oliveras and Martha Wood.

The band initially had a different line up than that which exists today, with Eugenia Kiernan on bass, but as Natalia tells Melz, the earlier days were a process of evolution:

“Santa Rita began in 2008, we were working so hard in the band, learning and trying things, composing our first songs and after a year, in 2009, we had our first gig.  At that moment we had another bassist, Eugenia Kiernan, but after three years in the band, she decided to return to her native country Argentina.  It was then we found Martha Wood.”

Martha originally played in various metal bands before joining Santa Rita, and the band have since worked on a video to accompany the track Báltico, which opens their High on the Seas LP:

“Our last music video, Báltico, was directed by Jordi Cussó. We really like to work with him, because of his extreme sense of beauty and the way his imagination works.  Báltico tells the story about the human inertia we are living nowadays. Like zombies, we follow something yet we don’t know exactly what it is… The smoke is everywhere — you just can’t see clearly. It is as though we have become blind.”  Natalia explains.

Santa Rita are all too aware that illusions exist everywhere in life, and the least they can do, is to use their music and lyrics as a means to vocalise these hidden truths that sometimes we’d rather not acknowledge:

“We get inspired by what concerns us and by things that we believe can move our listeners… In our lyrics we want to express the uncertainty about the future, we don’t know where we are going and what’s really happening around us. We don’t know who we are and we need to find a reason in our lives.  We need a change and the change starts in people’s minds.” 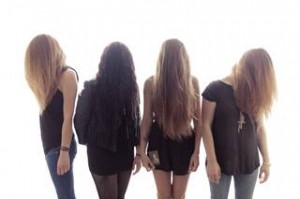 Lyrically, in Mar Muerto, to mean “Dead Sea”, Natalia chants “I hate myself” and likens the inner chaos to the unmoving, dead sea — an apathy that has taken over — a feeling of numbness that might have been gathered from a world that only lets you down.

Barcelona, however, with its vibrant, fast-lived culture, you’d expect that there are plenty of opportunities for new and aspiring musicians to make their mark, yet the members of Santa Rita have not ever busked as musicians in the Catalan capital.  Radio Catalunya is a supportive outlet for encouraging local artists into the public sphere – with recently heralded singer-songwriter Joana Serrat being featured, with her latest LP Dear Great Canyon.  Natalia explains the ethos behind Santa Rita’s song-writing process:

“Sometimes the idea of a song comes from a guitar idea, bass line or from a drum rhythm and then we add the rest. Each member brings up her view of the song, but the lyrics are mainly written by the lead singer.”

In recording their debut record, High on the Seas, they used a crowdfunding campaign which enabled listeners to purchase the album in advance of it being recorded — and so, the band were able to record and put their energies into what mattered.  Talking of the recording experience, Natalia says:

“It was an amazing and exciting experience. We were so glad to finally have some songs recorded. Despite our inexperience, everything was so easy, because we were all friends, and it was so ‘homemade’.”

Natalia tells Melz about the venues and community within Barcelona from her perspective as a songwriter and musician:

“We have played in venues like Apolo, Sidecar, Be Good, Be Cool, La [2] de Apolo…The good thing about Barcelona is that you can always find good shows and discover new bands.  We love Za!. You can find a lot of cultural offerings aimed at all audiences, you’ve just got to look in the right place.”

But just as smaller live music venues are risking closure across various cities in the UK, with Bristol’s oldest venue The Fleece recently having been under threat of closure (but thankfully, after over 41,000 supporters signed a petition, it has been saved), as well as Yeovil’s Orange Box closing down, Cardiff’s Barfly and London’s Luminaire — Barcelona, too, is of course suffering similar issues as Natalia describes:

“At the moment, with the difficult economic situation of Spain and the new high taxation across cultural investment, we are suffering the consequences: some places have closed in the last few days and very few people invest in music… But we won’t lose hope.  The future is coming.”

Natalia goes on to explain:

“Barcelona is a city full of music and art events, in fact, you can find here one of the most important music festivals in Europe, Primavera Sound. Also, there are a lot of different people working and living here and this is so inspiring.”

“There are a lot of venues in Barcelona, small, medium, large… We used to play in the smallest Apolo – LA 2 de Nitsa, our last concert was in Sidecar — I think it is the oldest independent venue in the city. And there are a lot of bars, pubs, art galleries, shops, where we usually play too. It’s not so difficult to find live music in Barcelona.”

For the band, music is their prime means to get their voices out there – and sometimes, the pressure to conform and reject their native language, can be a hurdle to overcome — but one that doesn’t detract from their music and lyrical content:

“We think about a story we want to talk about, and we write the lyrics in Spanish.  We then translate them to English. The sound of words matters when singing, so sometimes we need to adjust the meaning for the sake of the song. We have always listened to music in English so it comes easy for us.”

Yet, this decision to appeal at a more universal level, hasn’t always been a favourable move, locally…

“We didn’t find much support in our country singing in English and doing alternative music. Even though we have concerts very often and we feel happy about it, sometimes it’s difficult to even pay for the rent of the room which is usually high.”

However, playing at Primavera Sound to an international audience, did seemingly catapult them into a new direction.  They have, as a band, been influenced musically by artists internationally and the more periphery sounds that take some searching out:

“We like dark and surreal ideas…”  Natalia adds.  “A musician has feelings that only music can express, so when you share these feelings with other people who understand, there is a kind of magic. Being in a band is so hard, but it makes sense just to feel the magic between us when we are playing.  It´s a very emotional way to express yourself. It´s like therapy without a psychologist!  Nowadays, there are a lot of tools to make music at home. That´s perfect to work alone and swim inside of you.”

Upto now, Santa Rita have only made their music available via Bandcamp, and moving with the times, Natalia explains that she feels that digitally downloading is not actually destroying the artists’ value and autonomy but is allowing greater access and ultimately, exposure:

“Our goal, from the first day, was to spread our music around the world in every possible way. In 2008, we decided to put all of our catalogue onto a free download site.  Bands need people to listen to their music, and this is a faster way to do it. People these days listen to music on their mp3, we just want to make it easy for them. You will not destroy the music downloading music, don´t forget it!”

The band work closely with Aloud Music and their manager Sergio.

“We are with Aloud Music, and this is an independent record label. It´s like a big family with the “independent way of life” as its principle. They put all the albums on download for free to spread the music around the world… We agree with this philophosy and it´s an honour to be here, with musicians such as Ainara LeGardon or (lo:muêso)…”

Santa Rita have plans to tour in 2015.  They continue to play at events local to Barcelona – including at FNAC where they are often playing live.  Well worth an economy flight!

Santa Rita’s label is: aloudmusic.com, you can also find the band on BandCamp and Facebook.