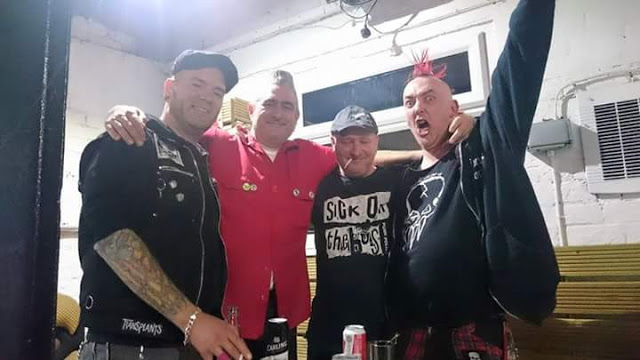 Scottish ska-punk anti-fascist activists taking no prisoners. Joe Whyte gets the low-down with Allan Restrick from the band.

Random Scandal hail from Edinburgh and have been burning up stages with their fiery Oi-ska-punk crossover since forming a couple of years ago.  They have very much aligned themselves with the global Antifa movement and are playing at the 0161 Festival in Manchester on 29th April 2016 with a whole raft of bands from across the punk world who share similar views including the irrepressible Blaggers ITA, Eastfield and Trioxin Cherry.

Random Scandal are Scoot Fawdoonskie on vocals (probably not his real name….), Allan Restrick on bass and vocals, Barron Williams on guitar and drummer Neil Smith. They formed over a love of street punk, reggae and ska and a shared hatred of racial intolerance and ignorance. The band are a fast and furious live proposition with lyrics that verge from hilarious to drop-dead serious. They’re a band not scared of having fun despite their often determined and resolute beliefs; I guess they think that hectoring a crowd does more damage than good and they keep the message simple and the energy high.

The band tell me that they’re taking a stand against what they see as an influx of fascist and “greyzone” people (i.e. folk who think that Skrewdriver’s early stuff was okay or support bands that have views that could be seen as sympathetic to the right wing or tolerant of fascism)  into the punk scene. Make of that what you will but one has to admire their no bullshit stance.

Allan- “Political wise we are 100% anti-fascist; while we don’t always sing directly about politics our songs are about situations caused by politics like “Vicious Circles” which is about my experience of being homeless and in an endless circle of no house no job and vice versa to the more obvious political stuff like “They Live” about the oppressive Tory government ruling over us just now.”

Allan gives a bit of the groups history and impending plans;

“Our original guitarist Andy left to concentrate on playing bass for Edinburgh ska band Big Fat Pandam and stepping in to take over was Barron (originally in The Defenestrators). One of his first gigs for us was at Punk for Pam in Edinburgh in March 2015 alongside GBH and The Varukers. We have toured with The Bus Station Loonies and this year we played Punk For Pam again with English Dogs and GBH. We have just released our debut album “Random Scandal” recorded at The Rec Rooms in Edinburgh and have several trips to England lined up for a pile of great events including Fuk Reddin in London, Anti-Pop Fest in Liverpool and Total Resistance in Derby with P.A.I.N at the end of August then it’s another trip in early September for Plymouth Punx Picnic and a few others.”

As regards  the scene, Allan is enthusiastic;
“For us the punk scene in the UK is great just now; we have shared stages with so many unique, interesting and talented folk in some great venues around the UK and it’s always like meeting new family everywhere you go.”

Random Scandal’s new album is available from their Facebook site above.