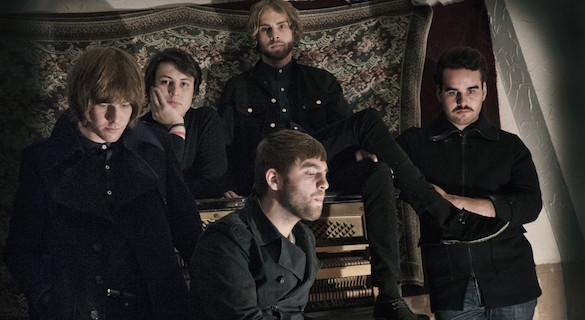 Barnsley’s Pusher make “good quality rock music that genuinely straddles the dark-side” says Louder Than War’s Jason White in this piece where he introduces the band and tells us about their new EP – which you can stream in full below.

Barnsley’s Pusher have garnered a cult following of online devotees, salivating over each carefully crafted and planned release. All this despite only having played their first hometown show together less than a month ago in December ’14 with Exit Calm. This is a band who have so far released five exquisite videos, including one from this, their latest, long-awaited EP, only a month ago.

Some would say that by not playing gigs in their home town, there is an aloof arrogance there. But why not aim high from the off? And frankly, anyone who decides to play a gig in Barnsley every month (or every fortnight as some do) are unwittingly laying their bed. Rare is always better than overcooked. 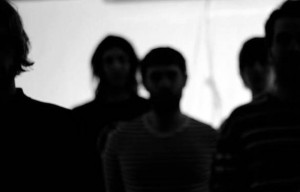 Pusher are Barnsley’s best band. I make no qualms about that. There are a number of local bands right now that have the right ingredients to blow-up big time in 2015. Aztec Doll, Trudger, Cavorts and specifically Servers, who are comparable to Pusher in so far as they see the importance in the mythology of the band. You’ll find each band’s musical DNA has its roots in The Doors, The Stooges and Velvet Underground, rather than the shitting Beatles. Why the fuck would I wanna hold your hand, when I could light your fire instead? Happy, jangly-guitar indie bands are ten a penny round ah way, but good quality rock music that genuinely straddles the dark-side is much harder to come by. Pusher don’t want to be the boys next door. They’d rather sit quietly underneath your floorboards, plotting their next move. It’s that quiet plotting, and a shit-load of talent of course, that could send this band stratospheric in 2015. I reckon this is the band that has the biggest chance of making it from here, whatever that hell ‘making it’ means. But why?

It’s easy to take a dig at a band who might think aesthetic is as important as their music. But Pusher aren’t a Topman indie band with hipster beards. Pusher know how important the full package is. It’s hard to create a genuine mystery around a band, especially in the current climate of facebook, twitter and X-Factor grooming. Think about Jim Morrison, Tom Waits and David Bowie, and those that still manage to have a cloak of mystery shrouding them in the internet age – Mark Lanegan, Polly Harvey, Nick Cave. Pusher’s image and music go totally hand-in-hand (with the help from a number of local photographers and designers). They haven’t created personae as such, but instead an aura of red-lit doom. Think of the things that made The Doors so enduring. Cinemascopic Death, Sex, Speed and Proper Rock n Roll. 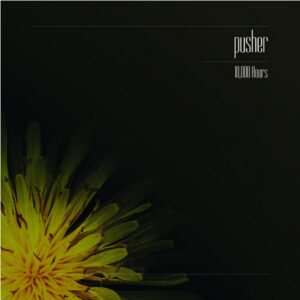 10,000 Hours starts off exactly as you’d hope it would after a year of waiting. ‘Everything Between’ has the storm trooper precision of Ben Scarfe’s chemical beats and the rumble of Thomas Hemingway’s bass. James Gilroy’s vocal is reverb-drench and shamanic. Second track, ‘On My Own’ has been running through my headphones for a month now. There will no doubt be many lazy reference points thrown round when it comes to this band itself and Gilroy’s voice in particular (e.g. Oasis, Kasabian, Verve), but his voice is bigger than all of these. The heavy brooding of Mark Lanegan is a comparison much more on the nose. Here the drums recall mid-90s Chemical Brothers and Bomb the Bass, but complimented by Nev and Clayton’s atmospheric guitar, the track recalls both Spaceman 3, Hookworms and Primal Scream. It’s the perfect midnight cocktail.

Track three is when things deviate from the expected path. The Road’s bass and the backing vocals are laid back with a sense of overarching menace – think When the Music’s Over or We Will Fall by The Stooges. Or even Boris’ collaboration with The Cult’s Ian Astbury. ‘Rain’ kicks up the pace a number of notches, with a frantic beat, hypnotic guitar and an urgent vocal. This is a song to crash cars to at night.

The EP closer, ‘Goodbye Earth – Hello  Universe’ is the biggest surprise here and is nothing like anything they have released before, yet it is exactly what I hoped I’d get. It’s the comedown you need after the pace of the previous tracks. It touches on acts like Soulsavers, Moby, UNKLE, and yes, when the string section come in, The Verve (I’m lazy too).

My only real criticism of anything here is that a couple of the tracks deserved to have been stretched out a little longer. Or maybe it should have been a full album including the previous releases. But that’s my own selfish wanting and the band IS simply progressing. Still, I can’t wait to see where 2015 takes Pusher.

10,000 HOURS is available to buy from iTunes and to stream via the band’s soundcloud page (or below!)

All words by Jason White. More writing by Jason can be found on these links: alternativebarnsley.com, Facebook and Twitter: @altbarnsley. Alternatively, his Louder Than War author’s archive is here.