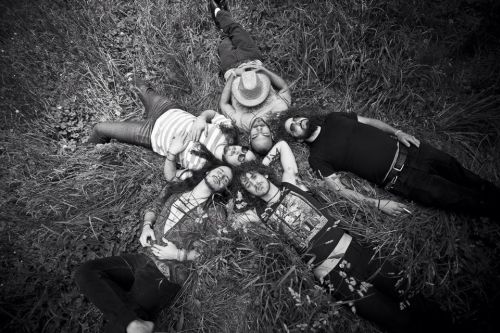 Brothers June Summer and Augie Pink found kinship in the gritty garage punk/60s doo-wop crossover style and non-stop party ethos of fellow Puerto Rican bands Davila 666, Los Vigilantes, and Las Ardillas, forming Plastic Pinks in 2013. June Summer had already been writing lyrics, and a US move to the idyllic beach sprawl of Miami, FLA became the catalyst for the band really getting off the ground in earnest. The Plastic Pinks sound is a giddy fusion of the purest, most enticing elements of popular music, which sometimes makes pinning them into an easily definable category somewhat difficult. “We wanted the catchy melodies and high energy, snotty, kind of lo-fi all good fun rock and roll. You can hear us do an in-your-face type of song, then jump to a snotty garage pop song, and then just be laid back in another. We can’t really label ourselves so we go with ‘Rad City Sticky Pop’ as our thing when we don’t answer with ‘we make rock and roll’.” June Summer says.

The now solidly established Plastic Pinks lineup features June Summer on lead vocals, Augie Pink on rhythm guitar and vocals, Luigi Toni La Rocca on lead guitar, Charlie De Jesus on bass and Nicholas Ochoa on drums. The band impressed Davila 666 frontman AJ Davila so much with “the worst recording of a song ever” via iPhone voice memo that he offered to record and produce their album if they came to Puerto Rico. Summer recalls, “After 16 bottles of Jack Daniels in 8 days, our album was recorded. The vocals came out great, our songs evolved into a full sound and the direction given to us by AJ made us get in touch with our sound and gave us ideas on where to take it next. After recording we kept in touch and a true friendship grew from the whole process. After a while, I contacted a lot of promoters/bookers like Pure Honey and Strutter USA Productions (who got us to play in two festivals; one in Miami, Sweatstock 5, and The Atlanta Mess-Around). There were many others that helped book the venues like the people from Cheap Time and Golden Pelicans, and then just a lot of calling venues and getting it done.”

I personally witnessed the dynamic Plastic Pinks live spectacle across three dates on the AJ Davila y Terror Amor East Coast tour and was immediately struck by the Tequila-fueled tornado of primal energy unleashed at each show, no matter how sparsely attended the club they performed at. June Summer has a demented rhumba rhythm to his footwork onstage while singing, as if he’s balancing on an invisible board and riding the biggest wave ever… Luigi stumbles blindly in an uncontainable destructive frenzy during his shredderific guitar freakouts, and later gave me an inventory of all the equipment he’d inadvertently totalled as a result. In the tradition of Davila 666 and the other aforementioned bands, Plastic Pinks are raw and raucous and full of unchained power, yet also bursting with maddeningly memorable hooks and choruses perfect for the intoxicated camaraderie of group singalongs in a squalid, graffiti-etched late night dive bar. They’re like a delinquent version of The Beach Boys or The Shangri-Las; a visceral, sweat-soaked collision of drunken bodies hurling into one another one minute, and the next, all hypnotically swaying ‘oooh ahhh’ harmonies…and yet it all makes perfect sense somehow!

I also experienced the legendary hangouts and “exposure to all sins of the night” during their 3 night stand here in New York, as well as the warm tribal bonds that are often forged in the fires of great enthusiasm and dumb, pleasurable excess. My cup was never dry and my plate was never empty when I needed some post-drink nourishment, and I remember how amazing the dawn looked as it painted over the city in bright orange streaks and pink ribbons of cloud when I eventually went home (if I came home at all). This feeling of freedom and this reckless mastery of fun embodies the essence of Plastic Pinks and their music. You can get wild, lose control, and be released from all your inhibitions and self-conscious timidity without care because you will always be in good company and well looked after…

They currently have a hand-dubbed split cassette release with Las Tias released by Cheap Miami which is limited to 100 copies and available here (very few left!), but you can also stream the tracks via the Plastic Pinks Bandcamp or SoundCloud pages while awaiting their forthcoming EP and the full album.

June Summer concludes, “Plastic Pinks will keep evolving and adding sounds to our arsenal. A lot of good things are planned. Hopefully we can get our album released by a label that can give the band the love it needs and release us to millions of ears. We like to get crazy but we are also hungry.” Spread la palabra!