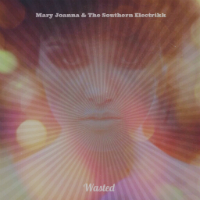 Mary Joanna & the Southern Electrikk defy easy classification.  Although the band is relatively new to Manchester’s vibrant music scene, some members are already well established in their own right through their time with some of the city’s coolest bands.

The band’s unique blend of dark synths, biting guitars and gritty bass lines, interlaced with Mary’s stunning vocals, allow them to effortlessly blend Post Punk, Psychedelia, Electronica, Dream Pop and Krautrock.  Songwriting duties are shared with each member contributing ideas, although it’s clear to see that Rikki Turner is the band’s driving force both creatively and motivationally.  He sees the band as unique in terms of its blend of youth and experience and he’s passionate about the sound they’ve cultivated for themselves; imagine Hells Angels drinking in a pub in Manchester city centre with The Shangri-las in 1965 and you’re nearly there.

As Rikki explains “The core sound is a collision of garage, psych and post punk and then added to that we draw influences from just about whatever comes our way… 60s Girl Bands are really doing it for us at the moment.  In the last twelve months we’ve strived to build a set list of songs for the live shows as well as having material for an album.  It’s going to be recorded in the new year, and it’s really important to us… the time has come to show Manchester and the rest of the country what we can do!”

With only a handful of gigs under their belts so far, Mary Joanna & The Southern Electrikk are eagerly awaiting their appearance at Manchester’s Tiger Lounge on Saturday September 20th, the official launch party for their new single ‘Wasted’.   They have also been invited to play at the 12 Bar Club in Soho on November 7th,.  This show, their London debut, sees them supported by Rough Trade Alumni Band of Holy Joy who will be performing an acoustic set, with Holy Joy’s frontman Johny Brown also taking care of the evening’s DJ duties.  Later that month sees them play their biggest show to date, when they take to the stage at the Etihad Stadium, home of Manchester City FC, on November 22nd, performing before the Swansea game.
Mary Joanna and the Southern Electrikk are gaining airplay and winning fans all over the world with new single ‘Wasted’ released September 22nd as a digital download.  Tickets for the single launch on September 20th are available for £6 from Skiddle.com from the link below