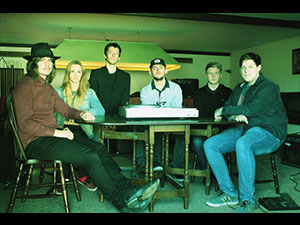 An ambitious young six-piece from North Staffs who are comfortable with all the big themes and have the musical maturity to match. Glenn Airey suggests you have a listen.

Most visitors to Leek in Staffordshire would agree that this lively but relaxed market town is fully deserving of its boastful billing as the ‘Queen of the Moorlands’. Nestling contentedly where the Potteries meet the Peaks, it’s home to countless fine pubs and cafés as well as the excellent Foxlowe Arts Centre, an impressive Georgian maison with the air of a rakish private members’ club that hosts drama, music, film and, at this time of year, events comprising the town’s annual Arts Festival.

The May bank holiday saw redoubtable local promoters The Situation celebrate their third birthday by taking over the Foxlowe for twelve hours of live music. They concentrated mainly on local acts but, in an audacious masterstroke, booked the legendary Vic Godard and Subway Sect as headliners on the second date of a North Staffs micro-tour. I’ve recently rambled at length on LTW about my enthusiasm for Vic’s work, and that of principal support act Moscow, so now I’d like to dip just a few places down the bill and bring to your attention a young local six-piece called Logical Drama.

Only active since summer 2013, they’ve come a long way very quickly, thanks to an obvious sense of ambition that translates into musical risk-taking and a hunger for progression that belies their absurdly tender years.

The name Logical Drama is intended to capture the paradox at the heart of a great musical performance: while the players are inescapably conscious of the creative process and the bricks they’re building with, all the audience should be concerned about is the broader sweep of the finished product, its moods and intensity; ideally, its drama.

Rhythm guitarist Toby Simcock tells me that his particular favourites, and a significant personal inspiration, are Black Sabbath. On the face of it, there isn’t much of a direct Sabs influence on LD’s sound: no monolithic powerchords or sludgy, cro-mag basslines. But in another sense I can see what he means. The sound is dark and dense and there’s an emphasis on the doomy, theatrical aspects of rock.

Current single ‘Through My Eyes’ is a typically atmospheric example, its clipped, pinpoint guitar pattern bringing early Foals records to mind as it sparkles its way across a portentous, brooding backdrop.

Elsewhere, and particularly on stage, the music of Logical Drama is elevated and distinguished by the tremendous contribution of teenage violinist Eloise Smith. I’m a sucker for a well-deployed violin in the right context – see Band of Holy Joy or the Dirty Three for instance  – and the effect is every bit as powerful here. She’s exceptional.

Joe Cooper’s vocals certainly have the depth and gravitas to match the material, while the band as a whole always sound capable of wrong-footing listeners with a subtle shift of mood. They leave themselves plenty of sonic space to work in and have the imagination to take advantage. It’s hard to know quite how close such a young band might be to the finished article, but I sense a restlessness that will keep them successfully exploring beyond their comfort zone for some time to come.

Logical Drama’s current single can be listened to here:

An earlier track, Escape From Reality is here  on YouTube.

Words by Glenn Airey. You can find more of Glenn’s writing for Louder Than War here and find him on Twitter @GlennAirey.