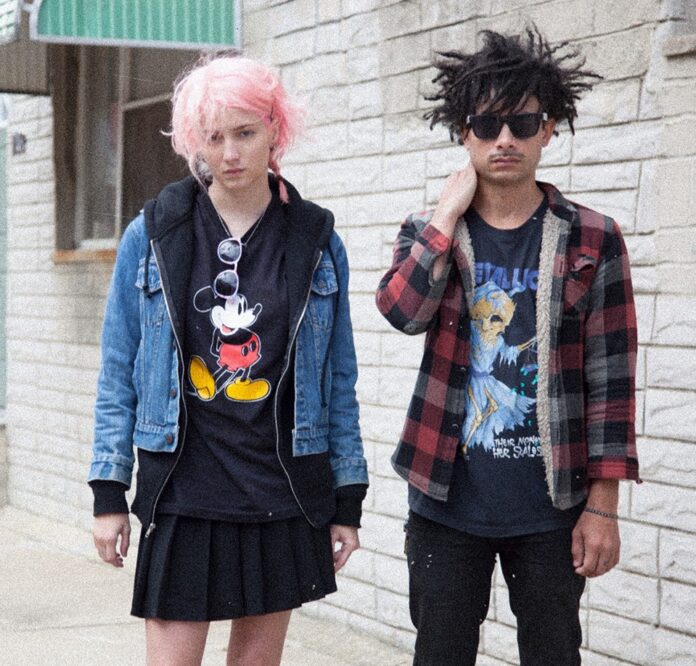 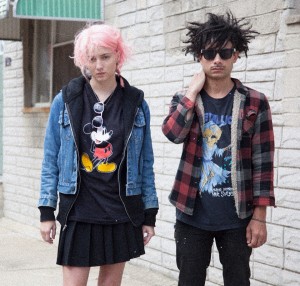 Brooklyn’s Hunters have taken off, thanks to their notoriously feisty and energetic live shows and a pretty solid debut LP released via Mom + Pop Music in September last year.

Hunters is an alternative noise rock four piece which features core duo Derek Watson and Brazilian born Isabel Almeida on guitar and shared vocal duties alongside newer additions to the lineup Thomas Martin on bass and Gregg Giuffre on drums. They started gaining traction way back in 2011 with their 5 song EP Hands On Fire, produced by James Iha of The Smashing Pumpkins and mixed by Yeah Yeah Yeahs guitarist Nick Zinner.

What do they sound like? Imagine the dueling corkscrew guitar drones of Sonic Youth mixed with the aggressive downtuned dissonance of A Perfect Circle and the fiery personality of LA punk rock pioneers The Avengers. Izzy barks, yelps and coos through the verses, and is sometimes joined by guitarist Derek Watson’s Kurt Cobain-esque moan in a coed call and response game of musical Marco Polo. There is a lot of crunchy distortion and guttural, chug-a-lug guitar riffing, but also present beneath the heaviness is a catchy pop sensibility, which is the real key to their effectiveness.

Hunters is a band that has really won me over. The Valentine’s Day show in the basement of The Studio at Webster Hall in 2013 was my first encounter with them, and truthfully, they bugged me. There was plenty of flailing and thrashing and flopping around onstage, but at the time it just seemed like a whole lot of self-conscious posturing, and their look (stripy tights, flannel shirts and super trendy ’can you see me?’ hairdos) also maybe somewhat unfairly helped to enforce this view. I appreciated the performance intensity they were striving for, but for whatever reason, it felt like they were trying too hard and I wasn’t quite convinced.

Somewhere between pink-haired singer Isabel ‘Dizzy Izzy’ Almeida getting her combat boot caught in the underskirt of my dress at a Brooklyn Hunx and His Punx show and their performances on the dimly-lit, dirty Persian rug adorned stages of last October’s CMJ venues, Hunters’ live presence underwent a major overhaul, dropping some of the unnecessary attention-seeking theatrics and becoming a leaner and more confident, song-focused assault on the senses. In a drink-addled and awestruck display of admiration after their show at The Flat, I remember proudly telling Izzy how many times I’d seen them (“You’re playing with Audacity soon, right? That’s so cool…”). What was happening to me??

Hunters have certainly benefitted from a rigorous touring schedule, and serving as a support act for a number of high quality heavyweights, most notably Hunx and His Punx, Jeff The Brotherhood, and Audacity. They are still a volatile force of adrenaline onstage, with Derek always in throttling command of his growling guitar, and Izzy losing herself in a possessed, trance-like state and often neglecting her own personal safety (she is currently recovering from a concussion and the band has been grounded from playing shows until further notice). She alternates between a limp, narcotized rag doll and a demented martial arts warrior in training with hunched, catatonic stupors one moment and whirling high kicks the next…

For these reasons, ultimately, it is as a live band where they’ve definitely got the edge, and (perhaps inevitably) the music is far more satisfying when experienced in this setting. Although competently executed, the record can seem a little sterile or tame by comparison, and at times their blatant Sonic Youth style noise intervals feel like an unessential embellishment which lets down their own originality.

That being said, their positivity, genuine enthusiasm and friendliness is refreshing, and their live shows continue to get better and better (as well as busier and busier). I couldn’t get near the stage at the free Brooklyn Night Bazaar show with Mac DeMarco this past January, and a young man at the front was so into it he felt the need to confess his newly awakened sexual feelings for shirtless and mustachioed drummer Greg Giuffre, even though he swore he’s not gay. That’s powerful stuff.

All words by Carrie Quartly, you can read more of her writing on the Louder Than War here.