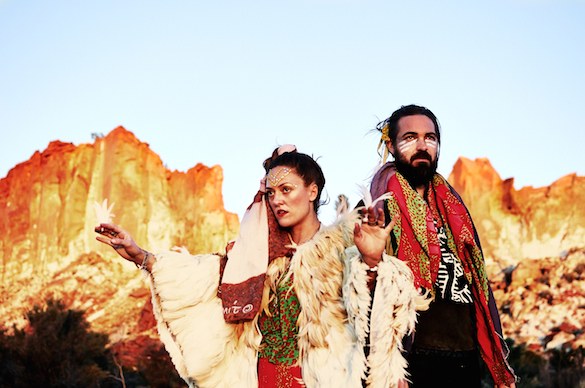 Australian experimental dream pop band Ginger & the Ghost are in the UK at the moment. Louder Than War’s Melz Durston recently caught up with Missy from the band, their conversation can be found below.

Music can tell a story through its lyrics or implicitly, through the feeling that the notes, vocals and imagery create. Sigur Ros, for example, don’t aim to reach out through their lyrics alone (for one thing, they coined their very own language of Hopelandic: a combination of the Icelandic and Vonlenska languages) as many are indecipherable. Yet, their videos strike you for their connection between the human spirit and the natural, Icelandic landscape.

Ginger & the Ghost are, first and foremost, visual artists and fashion designers. So it should come as no surprise that we should be drawn to their flamboyance and vibrancy as costume designers, choreographers and producers of their own music videos. Their debut collection of songs was released in 2012 and followed up by a series of handmade music videos, featuring Narnia-esque portals, flowing gowns and body-paint to give Gotye a run for his money. There’s a fairytale, Labyrinth quality to their visuals, with ethereal narratives running through their songs.

That’s not to say that they rely on visual imagery alone. Take a listen to their latest EP: Call Up the Whales and you’ll find yourself latching on to words that seem to have been strung together by silk and gold threads, spun from a levitating spinning-wheel far off in some distant land…

Ginger & the Ghost are Missy and Dan, born and raised in Australia — about as far from the UK as you can get.  Their debut singles One Type Of Dark and Where Wolf gained them critical acclaim in their homeland and several sold-out shows in San Francisco and New York – as well as appearing at SXSW. Not afraid of crossing oceans to bring their music to the world, tonight sees them play at Festibelly before they head on to a special free show at London’s Old Queen’s Head pub (show starts at 9pm) on Sunday 13th July. And all of this, sandwiched between an intense set of live dates in Australia.

Combining influences as varied as Little Dragon, and Scandinavian artists such as BOKKA, their sound is like nothing else. If I had to describe it, I’d say there’s a bit of a LAMB and Lou Rhodes vibe going on, with the added ascorbic of Tegan & Sara and distinctive sounds of Julia Stone. But that, vocally alone, cannot do this duo justice who really are setting their own standards – and not least, by their defiant decadence in staying true to their pursuits and perceptions, above all else.

I spoke with Missy from Ginger & the Ghost ahead of their shows this weekend.

Louder Than War: You were last in the UK in May this year … how was The Great Escape in Brighton?  What’s coming up on the horizon?

Missy: The great escape was fantastic and crazy. Really fun month ahead! Lots of exciting projects starting to bloom here!

Apart from your costume design, how does your voice express what you want to get across?  Are you as comfortable using your voice to get your point across or is your most natural form of expression, visual?

I think visual is my most natural expression.  It takes time to create so the thoughts and love that goes into each hot glue squish is meaningful yet chaotic and wild! Sometimes I just can’t work quick enough!!!!  I love to squeeze my voice then release it, growl , gravel, and splash it around so it creates textures and colour for the ears.

When realising you wrote your material in a converted water tank in the Australian outback, I wondered if you are at all influenced by other sounds or does it evolve, from someplace within you that you can’t explain?

It comes from the place of truth and honesty, I guess it’s much more honest than the words I use day to day .   It kills me that I’m not a walking dictionary !!! I generally have my own vocab of descriptive words and I also speak before I think sometimes, purely out of excitement.  Lyrics and sounds work as a language for me!!!

Can you tell us what it was like to live in a converted water tank?!

We didn’t live in it, it’s near Byron bay – very high up on a hill!

A view of clouds that looked like a frame capturing the world going by! That was the Brain Room.  An analog desk and the circular, above-ground water tank was connected through sound-proof doors.  Rocks on the walls to absorb and bounce the sound around in all the right places, and Persian rugs and candles in the rock holes at night.  Very, very cool.

You mentioned that you take inspiration from Little Dragon amongst other artists.  Are you familiar with Oh Land, and artists across Scandinavia and Iceland especially, who seem to have that similar sense of total freedom with their music, that you show in your own videos…

Yes, I feel connected musically especially to Scandinavia ! It’s my kinda vibe, our kinda vibe.  We adore BOKKA .  Check them out!

How do you go about drafting a potential video concept — they all seem really otherworldly, like Narnia — and a bit of Sigur Ros’ style in there too.  How much comes from imagination and how much feeds in from your own experiences, of travel particularly?

It’s all dreamt up , I spend time day dreaming and then scribbling, researching and diving into Google for days!  McQueen /John Paul Gaultier/ Nick Knight /Gareth Pugh are always on top of my list! Then I Moodboard the s**t out of my iPad and collect Pinterest images.   I choose words to Google like wilding / gothic / esoteric for example and always add fashion/ installation/ art etc…

I really don’t hang out in the scene because it’s so vast and we just burrow into our own world at our warehouse generally and hang with our little art head scruffy mates.

Can you tell us more about your invite for ‘fashionistas’ to get involved in your next music video… Do you see this artist-fan collaboration thing, as something you’ll do regularly?

That’s funny you found that out! I just came up with that and put it out there for fun and now so many great makers are excited to post us things! Really fun! I believe it’s an opportunity to use us as platform for their work — but there’s a limit! It’s more about creating a community and a connection with fans and friends, without the commerciality.  For us, it’s more real and rough!

We are makers of ‘collective creative culture’.  The only other artist I adore who has a handmade aesthetic is Karen O and her maker is the adorable Christian Joy…. I adore her tip.

More and more artists are choosing to do the ‘DIY’ thing more so now than ever before, because trust has been lost in the corporate companies, and the budgets aren’t there – but mostly, as a way to retain autonomy and keep true to yourself and your art.  Comes to mind is Laura Kidd (She Makes War) in Bristol, UK.  Do you think this is the way the music industry is headed?  And how is it sustainable for the artists?

It’s not sustainable ! But it’s free now at least….. The best things are born from low budgets, you really have to be resourceful and use your imagination.

Lastly, your latest EP, Call Up the Whales – what sort of themes did you intend to thread through this EP and how did it evolve from your imagination to the finished result?

I guess we thread victory and defeat / darkness and light / tension and release into our music .

All songs are written from a perspective of a character or object…. Or even a flower in one song! ‘Throwing Arrows’ is our all-time track…. It’s about a bunch of kids standing at the edge of the ocean.  Everyone on earth has been killed in endless wars and they are the only ones left, they only know war so they fight the wild, white horses (the waves).

Their latest EP: Call Up the Whales is now available: gingerandtheghost.com.

All words by Melz Durston. More writing by Melz’s on Louder Than War can be found at her author’s archive.