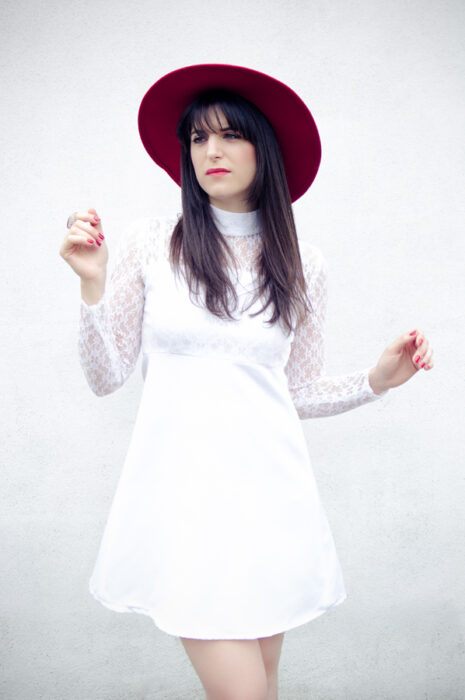 Every once in a while we get hunger pains to discover new music, although it seems the older you get the more difficult the task becomes. There’s the risk of sounding like your parents denouncing most new music as bloody rubbish and everything sounds the same, with age comes cynicism. You’ve heard it all before right? Wrong!

It would seem Genna Marabese, a Bedfordshire based musician is an odd exception to the rule. I literally stumbled across in one of those ‘recommended for you’ emails based on products I’ve purchased or clicked somewhere that I enjoy a particular artist. I clicked the recommended link and was instantly blown away by this new kooky alternative singer songwriter. Genna began her career under the name of Sister Ray making music which she describes as ‘gypsy circus music’ similar to cabaret vaudeville, very obscure! She then killed off her Sister Ray character and penned lots of material under her own name.

Avoid letting Genna Marabese go under your musical radar, this David Bowie influenced songstress is seriously worth investigating on Soundcloud and on YouTube. Her vocal style is a fine blend of PJ Harvey, Danielle Dax, Siouxsie Sioux and there’s even a smidgen of Kate Bush in the mix. To date she’s released two EP’s and has recently released her third single ‘I Need To Leave’. Her debut single ‘We Are Animal’ from 2012 received plenty of airplay and is a superb dark pop song about the animal within you who attempts to destroy everything good around you. Genna’s second single ‘Masquerade’ is a quirky affair with a riff reminiscent of Gary Numan’s track ‘Metal’ with the interesting lyric “You’re like a dog, on a dogs lead”.

The third single entitled ‘I Need To Leave’ is from her soon to be released ‘Self Titled’ album. It’s a short, fast pace, dark, hypnotic and edgy alternative track that puts me in mind of Elastica from around ‘The Menace’ period with a nod to The Fall. It’s now available to purchase now on Bandcamp.com.

You can hear her new track ‘I Need To Leave’ and purchase it here.

Here are links to her first two singles.