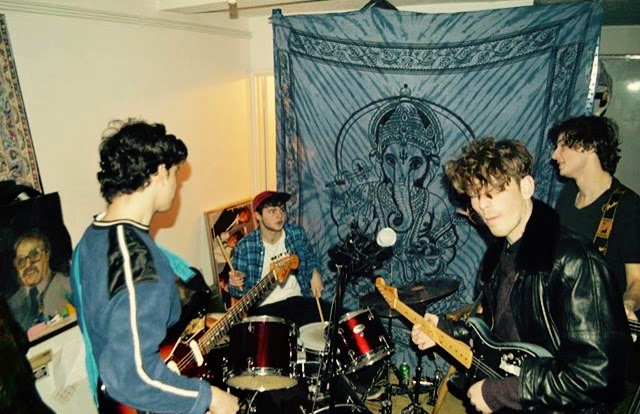 We say
This is really great. Sometimes a band arrives out of nowhere and sound fully formed. Egyptian Blue have somehow crafted a perfect and totally original sound – stripped down guitars that don’t play by the rules but make a music that is truly catchy and fascinating and edgy. They say they are ‘Post Punk Blues Pop’ and it’s all in there but somehow in a totally original way. This band could be massive…

Who the fuck are Egyptian Blue?

The debut video by Egyptian Blue, for the first official release “Do You Think You’re Worth Your Soul?” premieres today. So who are they?

They are 4 individuals who make music in a gloomy, dirty store room, above a jewellers in Colchester. Not long ago, the military police turned up in trucks, with dogs and guns, thinking these teenagers had broken into the premises.

“Do You Think You’re Worth Your Soul” Was recorded at XXXX studios in Brighton, and indeed asks the question we all need to consider more often, through a haze of post punk guitar fire.

Having been temporarily banned from various venues in Essex, the group has now made multiple appearances in East London and their next show is …. The will also support Wild Palms in Chelmsford

The video is directed by Chris Wade (Dog Brain Studios) who also recently worked with Kagoule and Broken Hands, in the bands new adopted home on the south coast and brings to life the paganistic mania of the music and lyric.