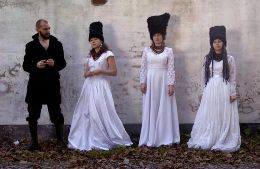 We say:
Dakha Brakha are a stunning take on old Ukrainian folk music with their perfect harmonies and 21st century sheen that makes their music sound perfectly modern whilst dealing with a traditional form. reaching out beyond their own folk tradition they have added rhythms and ideas from all over the world to create this stunning sound.

Formed ten years ago their music is one part haunting and one part thrilling and has the perfect undertow of melancholia to it that is always stunningly attractive.

They say:
Having experimented with Ukrainian folk music, the band has added rhythms of the surrounding world into their music, thus creating bright, unique and unforgettable image of DakhaBrakha. It will help to open up the potential of Ukrainian melodies and to bring it to the hearts and consciousness of the younger generation in Ukraine and the rest of the world as well.