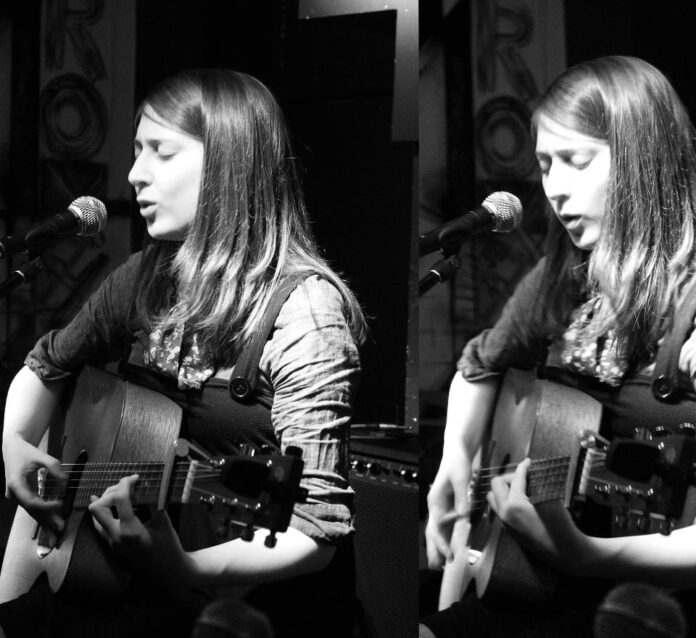 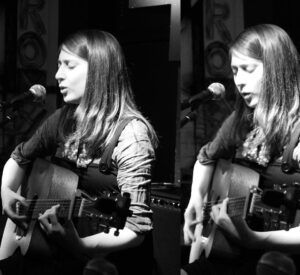 Now, I’ll admit I’m no fan of folk music. My preconception (which is probably skewed) is of real ale drinking, wooly jumper wearing, finger-in-the-ear morris dancing types getting all worthy with their fiddley-ree and tales of  Ye Olde England.

The whole authenticity thing annoys me too. I’m not particularly fond of facial hair, either, for that matter. I’ve always been of the opinion that Sufjan Stevens and his ilk should be tied to a chair, thrown a bar of soap and made to listen to the first Clash and Ramones albums on a constant loop.

So, at the Louise Distras show in Glasgow last week, when a friend who’s driving Ms Distras around Scotland tells me that the support is a “folk singer girl” I’m about to head to the bar.  Walking on stage with what looks like a look of sheer terror on her face, and dressed like she’s run through Oxfam in the dark covered in glue, Chrissy Barnacle straps on her nylon-stringed guitar and faces the punky horde.

Well, talk about grabbing a crowd by the throat. Finger picking her guitar (which is in some weird archaic tuning) it sounds like a full orchestra has just started playing. Filling the room with sound, it’s multi-layered tone is quite something.

Then she opens her mouth and the voice is unleashed. And what a voice. Creamy toned, gymnastically swooping and a cut-glass clarity that defies description, she’s got the punks onside from the get-go. There’s a bit of Joni Mitchell, a bit of, dare I say it, Kate Bush and a healthy dose of contemporary sounds, but it all works magically.  I guess there’s that thought that punk rock (and all music, for that matter) was the folk / protest music of its day and still is. The punk audience here tonight are clearly as open-minded as one would hope and Chrissy gets a great reception.

Despite her appearance of  being too young to get into a licensed premise she’s as charismatic as a seasoned trouper. She tells me afterwards that she got over her initial stage-fright by playing every open mic night she could and it’s clearly paid dividends; holding the crowds attention, she’s funny and self-effacing as she recounts tales of her collapsing relationships before leading us into another wondrously wandering musical tale. Charmed is a grin-inducing story of a boyfriend who was apparently a sorcerer who used his powers to woo our heroine.

Stowaways is a slower number with Chrissy’s velvety voice leading her gently picked guitar. Lyrically, the songs are as deep and dense as her ever-changing chord sequences and the sheer power of her songwriting rarely falters.

Chrissy has released two EP’s including current release Hazelnuts (and the earlier eponymous one)  which are available for free download on Bandcamp. Maybe I’ll need to re-evalute my thoughts on folk music. And, no, she doesn’t have facial hair

Chrissy Barnacle’s latest album can be downloaded for free from her Bandcamp. She can also be found on Facebook and Twitter.

All words by Joe Whyte whose Louder Than War author’s archive, where you can read more by him, is here.