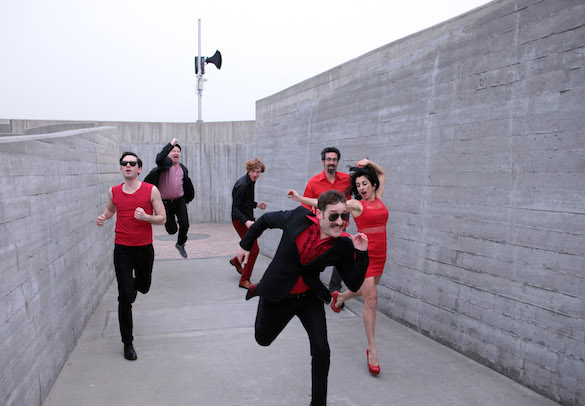 One of the many things I’ve realised during my time at Louder Than War is that klezmer punk is very popular amongst our writers. This is perhaps not surprising considering Brother John’s a huge fan of the most famous proponents of said genre, Gogol Bordello. Thing is, though, that they aren’t the only such band in the world and today’s new artist of the day is another band who could easily give GB a run for their money in a “Klezmer punk band” contest. Their name is Golem and we have the honour of premiering their latest video (Freydele) today, plus we also have news of their fourth album.

Fire-cracking hyper-kinetic explosions of sound are the trademark of this kind of music and Golem don’t disappoint in that respect. Their fourth album, Tanz, is due for release on May 13 and it’s an album guaranteed to put a smile on your face and a dance in your step. This will the first of Golem’s albums which has featured exclusively original creations. And judging by the quality herein one wonders why it’s taken them this long to do so!

“We chose the name Golem,” explains singer, accordionist and bandleader Annette Ezekiel Kogan, “because we play Jewish music like a wild, uninhibited monster. But the Golem has a heart, and we too have great reverence for tradition.”

The joy of Golem lies in their unbridled, wild, joyous, riotous even heart. It’s raw, unadulterated and it’s the most colourful, emotional music you can find. It’s also punk of course – it’s about doing what comes naturally, going with the flow and not worrying about anything except what you’re doing.

The album was recorded by the great Tony Maimone (Pere Ubu, They Might Be Giants), who truly captured their sound and their live chutzpah. And although they play acoustic instruments, the result is utterly electric.

“He recorded us all playing together in one room. He recorded us like a rock band – for example, he had my accordion going through two amps simultaneously,” Kogan recalls. “Tony helped us realize our desire to expose our wild edge.”

Check out Freydele below. And be sure to come back later when we run a review of their album.