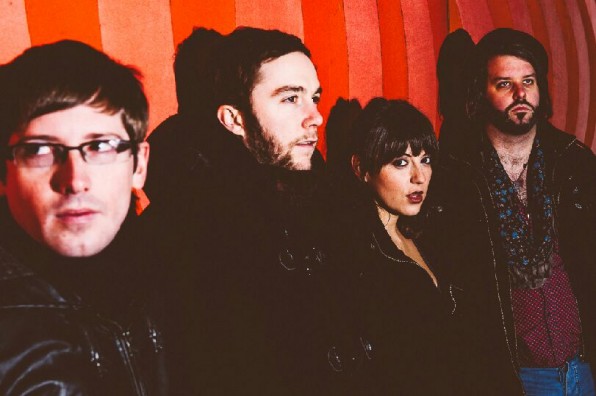 Photo of All American Girl by James Jebson.

Last year we were approached by a band, All American Girl, who were described as “a Hackney based dream-pop / alt rock band”. My first instinct was to sigh just a little bit. But I have a policy of giving anything a go at least once, and, if possible, to give it a go having abandoned any preconceptions I may have accrued about the band. And in this case I was glad I did because the unmastered mixes I ended up hearing turned out to be really rather good.

We didn’t end up covering them at all at the time a the mixes we heard were pretty rough, but fast forward to 2014 and it seems the band have now managed to use Pledge to fund the recording of a debut album which will be released in a month to two. They also have a great video for stand out track off the album, Dark Was the Night, which you may scroll down to hear.

AAG [All American Girl] are formed around San Franciscan singer-songwriter Melissa Clarke and it’s this that marks them out as something other than “just another Hackney based dream-pop / alt rock band”. To form the band she joined forces with friends and former members of post-hardcore band, ITA; Dave Bushall (guitars), Daniel Metcalf (bass) and Ben Glister (guitars) and also added Jack Carr on drums. Together they created a unique sound of their own, something that’s a long way away from post-hardcore, but rather that has roots in a classic pop structure aided by some great instrumentation which takes the music into a slightly different, positively psychedelic territory.

AAG is defined by Melissa’s delicate and distinct vocal playing against layered and intertwining guitars, backed-up by a jazzy rhythm section. The band cite the Brian Jonestown Massacre, the Doors and Elliott Smith as influences. For the later, they organised a tribute show at the Brixton Windmill last October. They’ve also been compared to Mazzy Star and Throwing Muses which perhaps give you a better idea of how they may sound – though not as good as just pressing play on the video below!

The debut album was recorded throughout last year and produced by Sean Read at Famous Times Studios in Hackney. Sean is a member of Edywn Collins’ band, Dexy’s and is a touring member of the Manics. The album is currently scheduled for release in April and, as a taster, the band have shot the video below.

You can find All American Girl on Facebook. They’re also Twitter as @AAGallamericangirl. More music by them ca be found at their Soundcloud too.