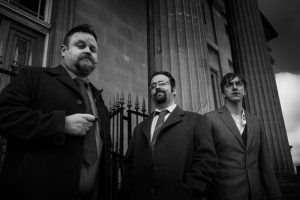 This is the second long player from Swansea’s My-Ra-Superstar on Arte Factum recordings. Two LPs? So why ‘New Artist?’ Well they certainly bang them out this lot and they haven’t been around long so I reckon they count!

Coming from the same lo-fi ram shackled scene/stable as the long lost John Peel band Steveless (more to come on them in LTW in the next month or so), these misfits led by vocalist (and chief misfit) Syd Howells, have been plugging away recording EP after LP after LP for years without actually playing a gig yet!? Why? Well one of them actually lives in Spain (handy) so geography is a problem.

Anyway, did I say lo-fi and ram shackled? Actually, this would do them a disservice. With My-Ra Superstar you don’t get too much lo-fi. In fact ‘Some of these objects are cursed’ is very accomplished in its production values, and the vocals and tunes come across very nicely.

Four songs into this CD and I can’t get away from Guided by Voices comparisons. The song writing, combined with the guitarist’s (Alistair Kiley) ear for a catchy hook have all the hallmarks of a great indie tune. And when combined with the immediate drumming (Gregg Stockdale) and Howells’ vocals, it all gels very nicely.

On some of the tracks you get a bit of Magazine which then morphs into the The Buzzcocks.  I like this. The whole album has a very post punk feel, but with a couple of fast tracks. A good combination. And the LP is sandwiched between tracks that are very reminiscent of (new) The Nightingales stuff.

With Ma-Ra Superstar you get song writing and guitar styles that remind one of Pavement, Truman’s water and the obvious comparison Guided By Voices. The guitar hooks and melodies throughout this long player just scream GBV! I don’t mean that in a derisory way. In fact, being compared to GBV is one of the biggest compliments a band can get I reckon! Seriously! They have that knack for a catchy hook that lasts for 2 minutes or so. Leaves you hanging. Then another one comes long like a number 5 bus. And then another. And another…

The vocals are high in the mix and the subjects range from unrequited love to someone who must have REALLY pissed the band off! Philosophical meanderings also add to the lyrical mix.

The vocal range also excels with deep Michael Gira-esque scariness to fey indie lamenting. You get the lot basically!

Geography accepted, it’s a shame they are sans gigs as they really do need to get out there and spread their brand of indie/outsider/post punk weirdness before someone else does! There isn’t enough of this weirdness around at the moment. Good stuff!

More My-Ra Superstar info is available via their website here