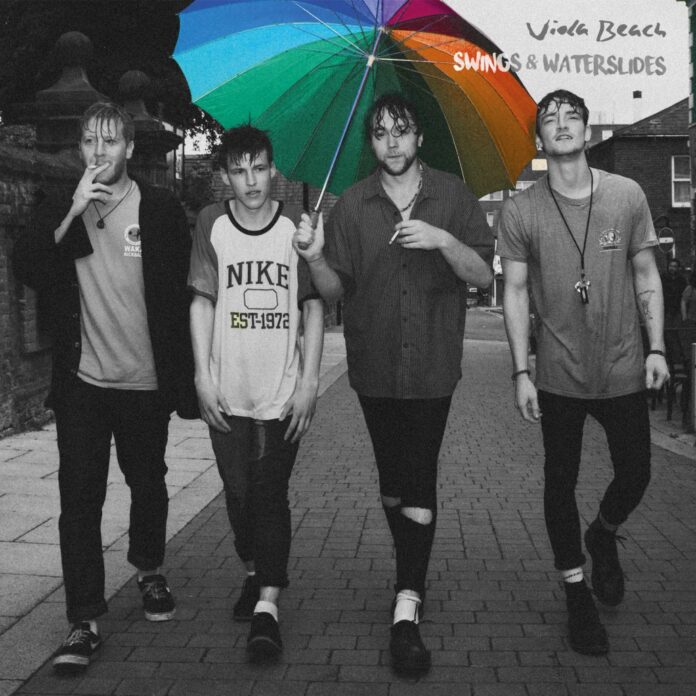 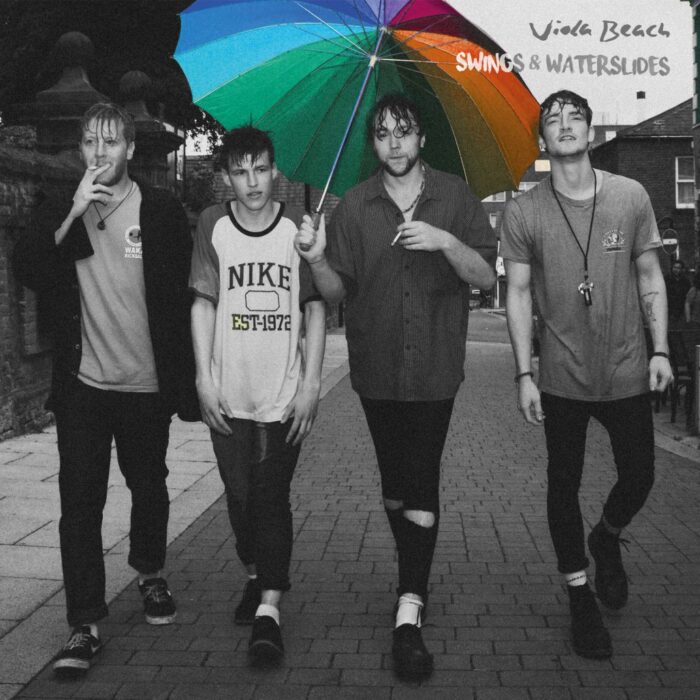 The North West isn’t the sunniest of places in the UK, particularly over Winter, but Warrington’s Viola Beach are the perfect antithesis for the pending gloom. Louder Than War’s Dave Beech catches up with them for a few words.

With the clocks going back tonight, you could be forgiven for thinking that with shorter days comes the inevitable bleakness of an English winter. And though you might be right, and I certainly wouldn’t bet against the fact, Warrington’s Viola Beach are a band for whom seasons mean nothing. Operating within a bubble of perpetual summer, their upbeat indie oikishness draws parallels to the likes of Rat Boy, and their latest single Swings and Waterslides is a perfect slice of optimistic slacker-pop that’s sure to offset the cold weather just enough to see us through to their next release.

We caught up with the band to find out a little more about them.

Louder Than War: Hey guys. Could you introduce yourselves and tell us a bit about the band please?

Viola Beach: Hello! We are Kris, Tom, River and Jack of Viola Beach. We’re a pop band from a town in the north of England called Warrington.

Viola Beach is a particularly Summery name, and well suited to your sound. The North West isn’t the sunniest place in the country though, how did the name come about?

The whole concept of it is escapism. Which is relevant to the fact that the north west is quite a drab place. But I came up with ‘Viola Beach’ as a hypothetical place to go to when you’re feeling particularly down. Because nobody can feel down on a beach right?

Your first single ‘Swings and Waterslides’ managed to pick up some decent radio airplay and impress the right people. How important do you think these early impressions are to make?

Yeah definitely very important. If anything though I’d say once you have that level of attention the following releases are just as if not more important cause we need to show that we’re consistent, which I hope we’re gonna do.

Whilst that single had a definite swagger and punky arrogance to it, its B-side ‘Cherry Vimto’ shows a much more chilled out side to you, was it an intentional decision to pair the two together in such a way?

I don’t think it was intentional no. We naturally have two sides to us as a band. As do most of the songs we write. But they do have similarities from a lyrical point of view as both songs came from a similar place despite it probably not seeming so. They follow an order. There’s ‘Stay with me…’ and then once she’s left ‘won’t you come home’.

The follow-up tracks have been produced by Ian Grimble, whose credits include Bear’s Den and Mumford & Sons, both acts who sound quite different to yourselves, what did he bring to the table in those sessions?

Yeah, he brought out a live element in us that we didn’t have before. So the tunes have a better energy in my opinion. They’re more natural.

What can expect from those tracks? Are they in a similar vein to ‘Swings & Waterslides’, or have you gone for something different?

Yeah they definitely draw certain similarities to Swings in the energy and the vibe. But they’re both their own songs in their own right. I think people that understood swings and enjoyed it will definitely enjoy these tracks.

Having only played your first gig a matter of months ago, you’ve got an impressive number of dates lined up in the run up to Christmas, how do you think you’ll find those?

Yeah there are quite a few aren’t there? I dunno I think we’re definitely still learning each time we play live and we get a little better each time. We’re used to each other on stage now though so it’ll be fun.

Finally, what can we expect from the band going in to the new year and beyond?

Well, new releases and plenty more shows. We’re all very excited about the new year but I don’t think we even know what to expect. We’ll just have to see!

No worries, thank you!