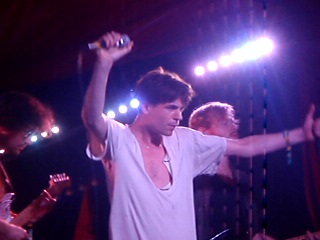 Keith Goldhanger met London band Sweat a couple of times during the summer, liked what he saw and waited patiently for them to record something. Once something did arrive he felt he had to tell the world. 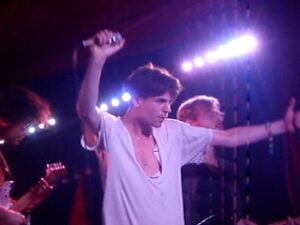 I’m glad these bastards have done this.

SWEAT turned up in front of us on a hot Tuesday evening this summer in a tiny room and made us stand on our toes, sway from side to side and smile pathetically at our fortuitous find.
It was another one of those evenings (the same evening my friends’ house was being “robbed by a huge spider”….long story, I’ll move on) when we eventually found ourselves standing inside that little smokers pen out on the pavement, trapped like lambs, as we watch other band members and punters joined together in harmony smoking fags and giving out loose change to passers by whilst trying to establish yet again why it is that such a band could exist without our prior knowledge.

In short, we had a little chat.
These little chats usually start with a request for the lead singer to tell us what the name of his band is.
After that…….well usually the bloke who we’d been watching fronting such a band won’t get a word in edgeways for the rest of the evening and will just stand there thinking to themselves that they’ve just met the biggest nutter of the night whilst looking for an escape route.
During this conversation and once I’d shut up, it was established their next show would be at the Standon Calling Festival a week later – Our favourite festival being the background for our new favourite band.
A band that we’d just found forty five minutes ago.
Fast forward a few days and one man is staggering between stages feeling slightly frustrated to find that the Autumn shift stage in this Hertfordshire field is running late so a huge diversion was required an hour later than planned just to go and have another look at what had been decided back in East London could be something rather special.
A lone man diverting himself away from a crazed mob dancing with our hands in the air to Paul Hartnoll’s 8.58 just to go and have another look at this lot that one of us just had to see again.
Asking himself why ?

Why can’t a man just get hammered to the point when he can let people down and accept that it really is OK sometimes to stay put and not go searching for something that may have simply just been a bunch of blokes doing an average gig in front of a man in a good mood for a Tuesday?.
You can’t beat strolling up to a not very highly popular tent at that time of the night, in a bad mood, asking yourself why you’ve just walked away from a massive party and then realising that the tiny niggle flickering inside your head was worth it.
These really are a wonderful bunch of sounds these people throw out we concluded.

At that stage of the night a victorious punch into the night sky was actioned, another beer opened and more time spent staggering around trying to work out who these people are and what they’d been up to previously.
It’s about then that they start wondering if it may be time to nonchalantly edge away, don a disguise and hide in the back of a van whilst discussing maybe forming a Showaddywaddy tribute band.
I really wanted to say this band are really groovy. Fuck yeah, i’ll put a great big bloody jumper on and stick my thumbs up in the air as well shall I ?
Anyway, just as I’d begun to forget about them, and with summer being a distant memory as the Autumn ends, the heating comes on and we seem bereft of a great deal of daylight in our lives, they send me this.

That bloke in that field couldn’t even remember what this band sounded like once this landed four months later and hovered over the play button ……. we’d been dancing…YEAH! dancing. I remember that bit…it was really late…. I wore that big heavy sheepskin coat I got for £15 at Glastonbury……

I think it does sound a bit like that band we saw instead of watching that bloke who was once in Orbital.
Doesn’t matter, this is catch up time now.
This track is cool as hell(thumbs up, big smile, wink of an eye before being reminded some of us are far too old to be arsing around in a field after midnight with a bloody great coat on).
This is a Sharp tearful pop tune backed by the smoothest background beat you are simply just waiting to soundtrack some big event in your life that may or may not happen. A tune to last for years and a hope that they don’t disappoint with the second.
Live, they look promising, history they may have a bit of.
We’ll go back there in a few months maybe and have a peep, but for the time being some of us are gearing up for a bit of a dance again like we have done to Hot Chip, Lonelady Primal Scream and one or two others recently.

I haven’t gone a day without listening to this since they sent it to me.

Dance you fuckers in a field again next summer to this….

I will – either on my own or with the rest of you.

Sweat – this is their debut recording and they’re from Peckham.
Lovely Jubbly as they say around there.