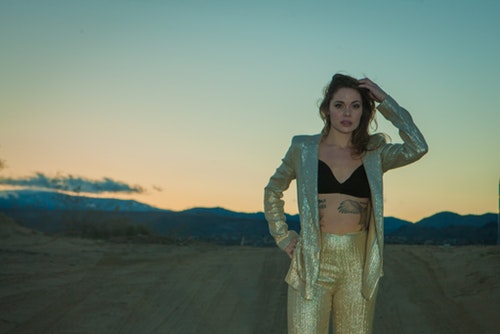 Having recently just hit the UK for the first time as a solo artist, Louder Than War caught up with Suzanne Santo following her support with Hozier.

Better known as one half of the acclaimed Americana duo HONEYHONEY Suzanne Santro recently hit the UK alongside Hosier on his recent run of shows. Fans of her deeply personal yet universally resonant brand of Americana, Louder Than War caught up with Suzanne to see just what she’s been up to recently.

Hey Suzanne, thanks for taking the time to answer our questions, how’s it going?

I’ll tell ya, it’s going well, but I’m feeling pretty badly about not getting these questions to you sooner. My deepest apologies.

You recently toured the UK with Hozier, how was that for you?

It was really something special. He has some really wonderful fans.

How do you find the crowds over here? Do they differ to those in the States?

The crowds in Europe and the UK were really excited and very welcoming!  I wouldn’t say they differ so much, as it was uncharted territory for me, not having played much over seas and I was very relieved to have been met with such kindness and enthusiasm.

You’ve just released your debut solo record, Ruby Red, what’s the reception been like so far?

I released Ruby Red as a solo/independent endeavor and am very proud of the reception, however I would’ve loved for that shit to have blown up!

Aside from your solo material you also play in HoneyHoney, do you find there’s subjects you can cover more readily as a solo artist than you could with the band?

Definitely.  HONEYHONEY is a true collaboration between Ben Jaffe and myself and we never really specified who wrote what.  It was easier to hide behind that ambiguity at times.  Ruby Red challenged me to step up to the plate as a single batter and really own my own words and emotions.  Now it’s just a damn emotional free for all, I tell ya. ( kidding… not really though)

Your solo output isn’t too dissimilar aesthetically from HoneyHoney, but how do the writing processes between the two differ?

Other than a collaboration on one of the tunes, I wrote the record by my lonesome.  I was so very excited to work with Butch Walker as a producer and didn’t want to let him, or myself down for that matter. I  put a decent amount of pressure on myself to write songs that didn’t suck, so I was writing every day and taking long walks in the canyon that I was living in at the time and just wrote and mulled over lyrics every chance I could get.  It was really cool.  I wish I could write songs all day.

Finally, what can we expect from you as the year progresses?

Well, you can expect me to be in the best shape of my life, because I just got a gym membership for the next month, so THAT’S happening… hmmm what else… I might get a dog this year?? Also, I’m working on my next record while on tour with Hozier and am hoping to make my way back to Europe at some point and tour in the cities that I opened up on his last run.  Oh, and I’m growing my hair long again, so I can feel like a pretty pretty princess rock star.
Thanks, Suzanne
~
More from Suzanne Santo can be found on her Facebook, Twitter and Instagram.