Home featured New Artist of the Day: The Sherpas

Billed as being “reminiscent of 80’s bands such as Orange Juice, Haircut 101 and A Certain Ratio” and being hyped by none other than Peter Hook as “‘brash” and “noisy”, Katie Clare introduces us to The Sherpas, the Exeter band who’re putting “groove and funk” back into British indie.

There have been indie pop bands before who’ve utilised the qualities of psychedelia subtly blended with spacious tones of indie pop, but The Sherpas have worked their own magic to that formula by perfectly adding in just a hint of funkiness which, along with poetic and slightly abstract lyricism, creates a sound that is danceable, attractive and fresh.

Formed two years ago while each of them was studying music at Exeter College, The Sherpas are Chris Tilke, Jake Daniel, Ben Milverton, JJ Williams and lead singer Pierre Roxon. The later is a natural front-man, whose dreamy baritone is perfectly in sync with the energetically sociable guitars and congenially British melodies his band mates produce. 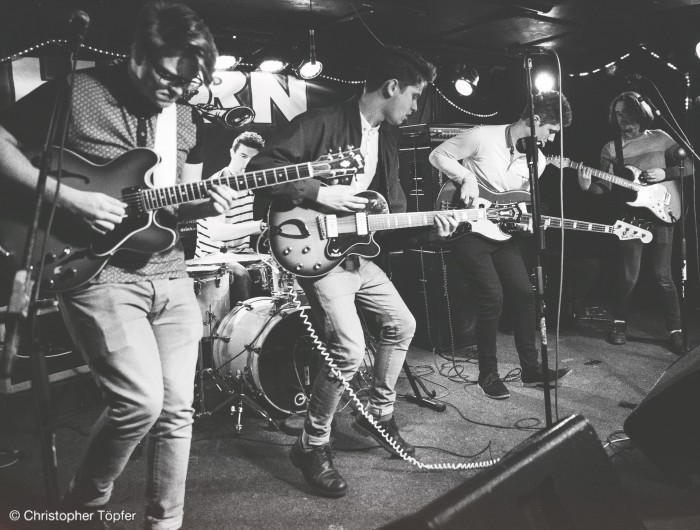 The Sherpas 2013 début EP Soiree is a very well-constructed and serves as a perfect introduction to the band’s abilities with the punchy, over-excited bursts of pop rock on For What It’s Worth, Wave To The Water and Soirée as well as the compellingly sweet, sorrow laden ambient harmonies of the track Back In Time.

Their first single Six Steps, which was released early last year, demonstrated how far the band have developed with a far richer sound, as does a free download the band offered last Christmas via their SoundCloud, a rather gratifying track called Wilderness.

The Sherpas have established themselves as an exceptional live act supporting the likes of Catfish and The Bottlemen and Little Comets and are off on their own headlining tour in June with a few festival appearances also slotted in along the way.

The Sherpas are also releasing a new EP soon which, going on previous endeavors, is sure to be the perfect accompaniment to the summer.