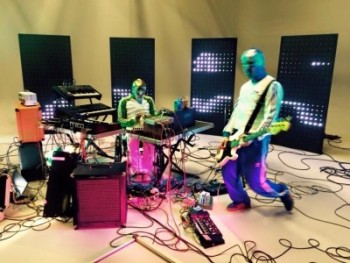 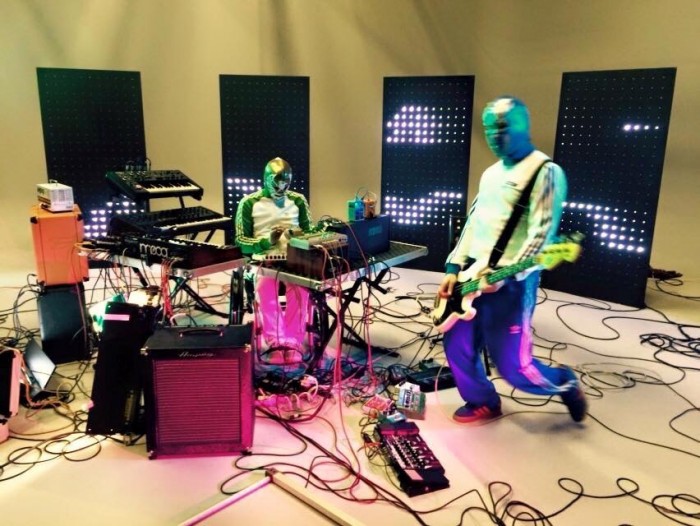 As an offshoot of astronaut suit wearing folktronica outfit – Spaceships Are Cool – you’d expect Revenge of Calculon to be not quite the full ticket. Stephen Murphy introduces us to the Luchador mask wearing Nottingham duo, and explains that whether you’re inebriated or sober, Revenge of Calculon are a band well worth checking out.

Booze. Perilous stuff. Few substances have the power to create such unbridled, wibbleing stupidity. Be it waking to discover a stranger’s face peering back at you from the other side of the bed, or the chatter of birdsong that greets you as you stir from your night’s sleep on the front doorstep – covered in your own vomit and shameful self-loathing; excess alcohol consumption can be a dangerous, messy business. For me though, getting older has meant less drinking, making unplanned romantic indiscretions and awkward chats with the local dry cleaners a thing of the past. Even with my own now moderate consumption though, a serious alcohol issue still remains – and that’s the problem of wine/beer/spirits making the most mediocre of live bands/singers (especially those I’ve not heard before) sound absolutely fucking great!

It’s embarrassing to think of how many gigs I’ve been in recent years, where even just a sniff of the barmaids apron has had me swearing on the graves of my ancestors that I’ve just witnessed the next Stone Roses or The Fall, only to find in the cold, sober light of day, that it was all a mirage, and that what’d actually been witnessed was in-fact no better than a troupe of chimpanzees trained to (badly) bash out Beady Eye b sides.

One band I saw recently for the first time, who had me frothing like a loon after just a few pints, and practically shitting with delight after a few more, were Nottingham’s Revenge of Calculon. Amazingly though, they turned out to be a relatively rare beast – a great band to witness live, even when as moderately drunk as a bastard, and just as entertaining when listened to via Soundcloud the next day, whilst eating a hangover busting bacon sandwich.

So what makes Revenge of Calculon such an intriguing musical prospect with or without the aid of grog? Well, the answer is two fold. First of all, they have tunes. Huge, gravel coated electro-synth-pop tunes that dig into the brain like those ear weevil things from Star Trek 2-The Wrath of Khan. Once heard, you are powerless to resist, and would probably end up giving the band your PIN numbers/car/first born should they ask it of you, such is the power of their music.

Secondly, Revenge of Calculon have such a strange sense of off-kilter uniqueness about them, that for my money, they’re one of the most outlandishly talented live acts I’ve seen in a long time. As mentioned they sound fantastic as a recorded entity, but on stage, its a case of performance art meets Mexican wrestling paraphernalia and shell suits, with a slightly uncomfortable topping of throbbing fetishised sexual intrigue. Seriously weird. Seriously great.

A good example of Revenge of Calculon’s head melting majesty is the wonderful Particle Destroyer. Listen to this and you’ll know what it’d be like to have popcorn kernels poked into every body orifice and forced to sit in an extremely warm room. Frightening, yet strangely enjoyable.

You owe it to yourself to seek out Revenge of Calculon. Certainly hunt down their recorded material, but for the love of god, see them live as well if you can, because whether you’re horribly intoxicated or timidly abstinent, it’ll be an experience you’ll not forget in a hurry.

Revenge of Calculon can be found online here: revengeofcalculon.com. They’re also on Facebook and tweet as @RevOfCalculon.

Here more music by them on Vimeo.