Uncompromising, no-holds-barred political thrash-blitz from the Scottish Borders with a sense of humour. Probably not recording a ballad anytime soon…. Louder Than War’s Joe Whyte investigates.

Protest music comes in many forms; Joni Mitchell, Bob Dylan, Woodie Guthrie, Billy Bragg, The Clash and any number of flower-in-the-hair folkies. Anger is an energy according to Mr Lydon and believe me, Razor Sharp Death Blizzard have rather a lot of that. Seeing an album review in Vive Le Rock and discovering that they were compatriots piqued my interest.

A quick Facebook search turned up the video for the opening (and title) track on their “Riot, Revolt, Revolution” mini album. It’s nice to hear a reasoned, informed, articulate political argument but quite frankly, RSDB put it so much more succinctly with a chorus that goes; “Tory bastard scum! You’re all cunts!” If you’re gonna say it, you might as well do it properly, I guess…..

Opening with a sample of some Cameron-shite, the song very quickly makes it’s mark and leaves. Careening guitar, shrieked vocals and a battery of drums and sounding like the third level of Dante’s Inferno if it had a metal night on, it’s definitely not for the faint of heart.

The band were formed from the ashes of a couple of other well-known names on the scene, namely Ridgeback and The Swellbellys. Jamie Clark on vocals fronted the former and Daz McSwell was guitarist with the latter. Spending a couple of years finding a settled line-up has halted things a little but with Greg Armstrong on drums and Graham Paxton on bass duties, things are falling into place. 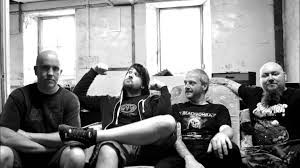 Second song on the album is “Dirty War” and keeps the brutal velocity going. This is not a band that do things by half when double will do. In fact, talking about double, Armstrong’s twin kick drum assault on “Saville” (presumably about the titular ex-BBC scumbag) is a thing of great wonder.

It would appear that thrash is back. If it was ever away. And it’s as cranium-defiling as it always was.

The band can be found on Facebook and Bandcamp.