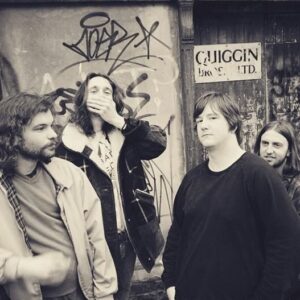 Scouse psych punks Ohmns have been causing quite a stir of late. Louder Than War’s Sean Diamond introduces you.

Since mid 2014 Ohmns have been assaulting the senses and eardrums of unsuspecting gig-goers, seeming to inspire awe, outrage and what-the-fuck-was-that levels of confusion and general bewilderment in equal measure. A four piece from Liverpool, their notoriously chaotic live shows (including a particularly fierce night which will now be known forevermore as “Sean Penn’s a grass”) have been spreading like wildfire across the city and its surrounding areas, to the point where the council are seriously considering enforcing the use of armed security guards at their gigs. Well, not quite, but you could certainly be forgiven for believing such a statement after listening to their latest three Soundcloud tracks, their first publicly released studio recordings. Feeling brave? Please, read on.

The most recent track is a reading of legendary Detroit Garage rockers The Gories’ rockabilly anthem ‘View From Here’; a far heavier, shoutier, infinitely more scary beast than the original. Demonic vocals, crazed terrace chanting and a Charles Campion sized bassline all conspire to create an unholy racket ideal for burning chickens to whilst daubed in the blood of virgins at your local Black Mass. Certifiable and then some.

Even more deranged (incredibly) is ‘Boil D Rice’, an unbelievably raucous Punk Rock rumpus of a song which sounds like the soundtrack to a Dwarf Throwing competition at a derelict asylum populated with the ghosts of dead serial killers. It basically consists of an unremittingly loud punk riff backed up with percussion getting faster and louder, louder and faster, faster and louder, before reaching a climax (of sorts) with some insane, virtually unintelligible screaming about boiling rice, a recipe instruction manual from Hell displaying all the subtlety of a ham faced Bullingdon boy inserting his manhood into the gaping mouth of a deceased Swine. There are shades of the cartoonish manic punk thrust of The Dickies in there, the futuristic 2000 AD surround sound meltdown of The Membranes, and also the breakneck post-rock pandemonium of defunct Oxford noiseniks 50ft Panda. Put simply, it fucking rocks, and won’t so much knock you for six as it will for six hundred and eighty.

Then there’s the single, the ‘pop’ moment if you will. ‘Paul Is Sure, On D Shore’ is blessed with something in the way of a discernible tune, however that’s not to say it’s any safer to handle. A deceptively restrained intro soon gives way to a fantastically doom-laden destroying groove, psychedelic sound effects and a Lennonesque lead vocal all come together to create a towering molten cosmic soundscape of multi-coloured 21st century psych-punk attitude, just about held together by a Mingus level of musical tightness and a razor sharp production you could slice a brick with. Haven’t a clue what it means or whom or what the title refers to, and even less of one when it comes to what exactly inspired the damn thing in the first place, although I have a gut feeling this is probably for the best. Some things are best left unexplained. Besides, guessing is often more fun.

Oh, just in case you’re wondering, it’s pronounced ‘Omens.’ You might like ’em, you might not. Either way, good or bad, you’re in for one heck of a trip. Why not give it a try? Just this once…