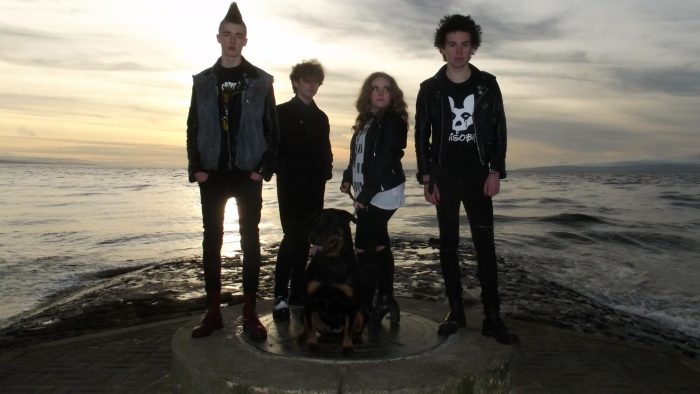 Scottish teen punks showing the old guard how it should be done. Louder Than War’s Joe Whyte investigates.

Every once in a while, a new band comes along that simply blows you off your feet and restores your faith in music . That band are a bunch of Ayrshire teenagers who play punk rock with the attitude, chutzpah and sheer God-given belief  that would bring a smile to the wizened visage of anyone who loved punk for all of the right reasons. That band are the Minority Rule and I firmly believe that if they can keep doing what they are doing, they’re destined for very big things.

The Scottish punk scene is a very strange beast indeed. It is mired in accusations, back-stabbing, he-said-she-said playground stuff and a serious set of divisive attitudes as regards who will and wont play with who and so on. That’s an article for another time; or maybe not. It’s just boring, to be honest. For a band like this, it’s probably no bad thing that they’re on the periphery.

Anyway to The Minority Rule who are a four-piece band from Robert Burns country and none of whom are old enough to be playing in licensed premises. This could pose a problem but they’ve surmounted it by putting on their own “unders” gigs and attracting a growing crowd of admirers from across the age ranges. Being an old dinosaur myself, my initial thought on seeing them mentioned  was “they’ll be a snot-nosed, pretty boy pop-punk group who sound like Blink 182” but what a pleasant surprise. The songs on their two releases to date are clever, mature, well-crafted and downright grin-inducing. They’re also incredibly good musicians; the songs are tight, the playing fast and reckless and the energy levels are constantly leaping into the ether. 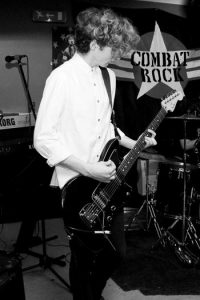 The Minority Rule have released two singles which are available on all of the usual DL outlets. “Her Black Dog” is an inventive, captivating three minute head rush that’s subject matter is clearly more than the typical dumb-punk fare; written (I presume) for an acquaintance with depression, it’s a sharp, direct and perceptive piece of composing.  The guitar of Michael McFarlane snarls, the rhythm section of Gregor Ritchie and Leona Broadfoot keep the song pulsing and lead singer Nick Wardrop adds the perfect amount of sneer to his rich vocals. 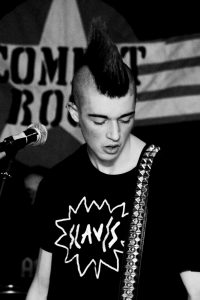 The song is also, thankfully, bereft of the sub-metal riffing of most contemporary punk. The guitar sound is more reminiscent of The Only Ones or The Heartbreakers than Zakk Wylde or Randy Roads with its minor key changes and the playful solo is a thing of real grace that rolls of into a sweet feedback as the bass and drums throb and thrust. Vocally, Wardrop has the pop smarts of Paul Westerberg and the snap and guile of Strummer.

They’re quite the live proposition too; a band of this tender age shouldn’t be this confident but it’s great to see and probably what makes me think they’re destined to do something with their not inconsiderable talents.

The new single is another frenetic, splenetic attack on the old ways; “MTV “ is a smoking, viscous piece of old-school punk spiced up with the vitality and zest of youth. It’s a blistering attack on modern music framed in two and a bit minutes of popping drums, pogo-a-gogo bass and cleaving guitar chords.

The Minority Rule made this old cynic believe again. Let them do the same to you.