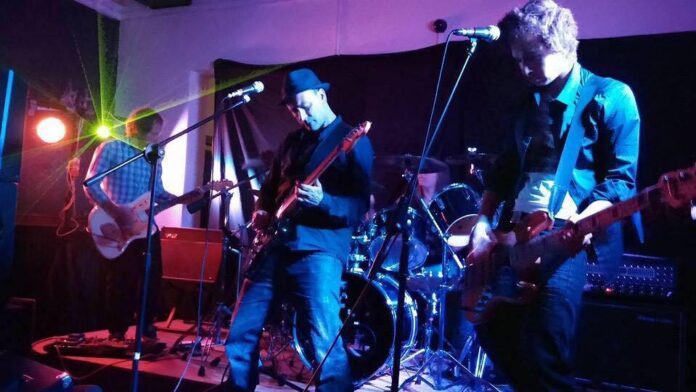 Their first demo an EP called NSFW has a good start with songs NSFW, Self Service Sinner, I Don’t Get it!, Triple 7s.

Telling us about his band Chris Gans says, – ‘It was decided on a night out with Ben to have a jam. He had learnt Californication by the Chili Peppers on bass. Darren (lead/rhythm guitar) came up with the name Automatic is Easy and says “I always like the name being a statement about how lazy and dependent on technology and automation we’ve all become. That and it just sounded pretty good.” That idea was extended in our artwork with the use of images of guns and ammunition. We are democratic and voted it in!’

Previously Chris Gans played in bands some time ago called Even Jammier and The Pyramid Quartet (a duo) amongst others and did a few sessions. ‘Also had a small label and was music supervisor on a feature film.’, – Chris says. ‘This is Darren’s 1st band. Phil played in a melodic rock band based in York called Live in Shadows. Russ is much in demand as a drummer and also plays guitar.- he has played with The Couldn’t Care Less, Drivers of Death Machines and quite a few more.’

Chris names the most definitive songs Self Service Sinner and NSFW. NSFW is a very post punk band with a melodic sound as well as lyrics in it.

Talking about song writing Chris tells, – ‘We all tend to put our own parts together. Darren writes most of the music to start and I write the lyrics. Everyone is encouraged to come up with ideas.’

‘We mostly write about injustice and the people at the top who create it! Bankers and the recession, bullying bosses and greedy bastards in general, so far! Our latest demo NSFW is about getting angry and upset at work due to unfair treatment from some bullying sociopath who likes to wield their power for the sake of it. It is a twist on NSFW. All sorts of stuff is now NSFW but in the song it is me that isn’t safe because I’m losing it. I am quite proud of the fact that I got “Freakeconomists” into the lyrics – they blame low productivity in this country on the sort of behaviour we are talking about!’

The song Triple 7 has a punk sound. ‘I guess this song was very influenced by the Clash and the way they could combine different tempos and feels.’, – Chris Gans says. ‘Ben the 1st bass player asked me to write some lyrics about what happened in Iceland after the crash a few years ago and the way that much of it wasn’t reported in the media in the UK. The faster upbeat sections mainly praise Iceland, whereas the slower sections talk about the media. Iceland seems to be about the only place that really punished the bankers that caused the crash and stood up to the pressures that followed!’

Now Automatic is Easy plays all around Leeds in the The Fenton, The Packhorse, The Fox and Newt, The High Farm venues. Also they played The RS bar in Sheffield, and The Snooty Fox in Wakefield and fundraiser for the Unity Day festival in Leeds. The supported such bands as The Expelaires, Blind Dead McJones Band, Black Volvo, Purple Thread, Broken Road, Kath and the Kicks, Black Ocean. We have also been supported by The Lost Souls, Sweet Little Machine, Porl Whos and Vanessa Maria.

Automatic is Easy has plan to have plenty of gigs next year. ‘We are currently finishing off new material with new members and will be releasing info about our 2016 tour dates in a couple of months.’.

All words by Sophie Luchovsky. More writing by Sophie on Louder Than War can be found at her author’s archive.