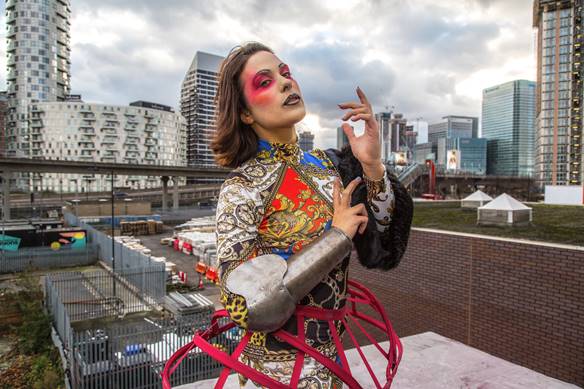 JYLDA is Italian-German Gianna Gehlhar‘s musical alter ego. Now based in London after a stint in Berlin, she recent released her eagerly anticipated new single Torrential River ahead of her upcoming debut EP Twitch. Louder Than War found out more.

Hi Gianna, thanks for taking the time to answer our questions, how are things with you?

I’m very well thanks, nice to have a chat with you.

You’ve just released your current single, Torrential River, what have the reactions been like so far?

Yeah, it’s exciting! It has been great so far and I’m happy to put it out there — luckily people can relate to it well. Which is a bit surreal sometimes.

The track feels dark, fractured even, but there’s still a sense of optimism and grandiosity also. What’s the story behind it?

The song is about unrequited love. While the lyrics are very dark I wanted the arrangement to show the potential of heartbreak and the power that lies in it, the chance to become someone new. You have to drown to rise up. Also, I’ve found the best remedy in dance… so the song morphs from a ballad into a dance track.

Having Italian/German heritage as well as living in Berlin and now London, there’s no denying that you’re European through and through. How has this influenced your music?

I grew up on Italian music from the 70ies and feel like it still has an impact on the way I write melodies. The German classical music tradition has formed me too, being trained in opera. And Berlin’s electronic music. But most importantly, I’m deeply in love with British pop and the scene here.
And yeah absolutely — I like the idea of being European more than associating with one nation… especially now.

Similarly, your musical influences feel somewhat varied. Who are some of the artists that you feel have influenced you the most?

You’re not far from releasing your debut EP. What can we expect from that when it drops?

I would say that the other tracks are more about sensuality and dance. They are bit more light-hearted but still with a melancholy to them (I guess that’s who I am). Around the time when the EP drops I will play my debut headline show in London. All I can say is that it will take place in a secret location and that there’s a dress code: blood red.

Finally, once the EP is finally out there, what can we expect from JYLDA as the year progresses?

I’m writing lots of new music at the moment and will release more tracks in autumn. Over the last few months, I’ve also been collaborating with some other artists and I hope to share the results soon. And I will be performing live – I really enjoy playing shows.