Jim Threat is one of those guys who has done it, seen it and probably bought the commemorative tea-towel. As a callow youth, he fronted and played guitar with The Threats, an Edinburgh band who took the best of their UK82 punky influences and married them to a hint of pop sensibility and youthful exuberance. They toured the States, released several albums and were well-regarded before dissolving in a cloud of rancour and heavy metal clichés. The old musical differences reared their ugly heads as some of the band wanted to pursue a more rock/metal direction and Jim Threat didn’t. They reformed briefly a few years back but similar problems of direction quickly put paid to that.

Holing up in his Dalkeith studio, Threat thought that his days at the coalface of punk rock were over. He is, however, a well-renowned producer and engineer in his own right. Keeping his hand in with recording his own material,  it became clear that the old magic was still there. 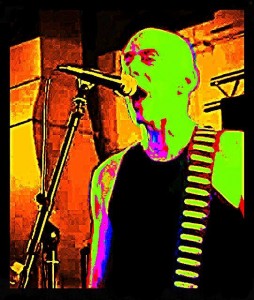 With a new EP just released on Dr Strange Records, things are on the move again for The Vultures. With four tracks of energetic, pulsing fun, the “Afraid Of The Dark” EP is a thing of great wonder. With hints of fellow East-coasters The Rezillos and a dollop of The Ramones, The Vultures craft a dark, gritty sound with hints of the Goth-y period of The Damned inherent in the grooves. (Yes, it’s on vinyl!)

Opening track “Afraid” has a glorious, descending glam-y riff that the song centres around. It is two and a bit minutes of walloping energy and hits straight to the heart of the matter. No messing, here.

“Psyclemania” has the bones of NYC hardcore around which Threat delivers his tale of woe. With a scything, freak-out guitar solo in the middle of the pulsating almost-rockabilly rhythms of the track, it’s dense, direct and rather splendid.

“Get Off” and “Time Changers” make up the second side of the EP and are equally as enthralling as what precedes.

The record is available on all formats and you can get it from the band themselves via their FB site above or from most online retailers.

Jim can be found on Facebook and the EP is available on Amazon. The Dr Strange website is here.