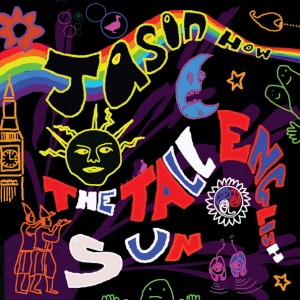 Psychedelia seems, these days, to be mostly dense, dark, and druggy. There’s nowt wrong with that; I’ve reviewed (and loved) a whole raft of sonic explorers in recent times. Sometimes, however, I miss the original sound. Y’know, the made-in-the-garage, slightly naive, wonky dazzle of the 13th Floor Elevators, The Seeds and all of those one-single-and-gone bands that appeared on Nuggets, Pebbles and the like.

Jason How is a man who agrees. He’s from the school of The Dukes Of Stratosphear (a simply brilliant XTC secret side project), The Creation, the Poets and all of those other weirdly wonderful, quintessentially English bands that ploughed a lonely psychedelic furrow, mostly to little clamour from the great British record buying public.

Jason is a man with a fair old lineage himself; his old man James was the man behind Rotosound strings who supplied Hendrix, Pink Floyd, The Who and the cream of Brit rock throughout several decades and Jason now heads up the company himself. They’re a company that is a true British institution and despite keeping a monastic existence as regards his music, How’s songs are more than worthy of some LTW attention.

With two albums  self-released (and on which How played most of the instruments) in the last couple of years, he’s nothing if not prolific. Speedboat On A Magic Sea was the first release and it’s a cracking mash-up of The Bevis Frond, The Television Personalities and Syd Barrett’s solo albums. Full of clever lyrics, intricately beautiful overlapping harmonies, chiming guitars and sun-splashed songwriting, the album is an aural ear-to-ear grin with added THC. Looking Glass Of Time is typical of the album’s over-riding joy and gleaming fun.

If I Could Be President reminds me of a Julian Cope song but I can’t for the life of me place which one. I’m sure it’ll come back to me. Nonetheless, it jangles and frolics along and has all of the good-humoured animation of Graham Coxon’s solo material with a little bit of the Monochrome Set’s arch waggishness thrown in.

The most recent album is The Tall English Sun which Jason himself is happier with; personally I like both of them but Sun is certainly the denser and more musically intricate of the two. It’s markedly darker, too. Lyrically, there’s an over-riding, nagging sense of loss and loneliness among the exquisite chord changes but the sense of optimism always remains. April Rained Forever is typically downbeat in it’s minor key symmetry.

Don’t You Ever Run Away could have been a Crosby, Stills, Nash and Young out-take; spiraling guitars, chiming 12-string and delicate, serpentine vocals all mesh together into a song that has a familiarity of all of the good tunes.

Jason How is a man who makes music for all of the right reasons; he has to, it’s in his blood and his soul and he’s unimpressed with the vagaries of styles and of popular music. Britain needs the outsiders, the weirdos, the driven. Make some room for Jason How.

All words by Joe Whyte. You can read more from Joe on Louder Than War here.