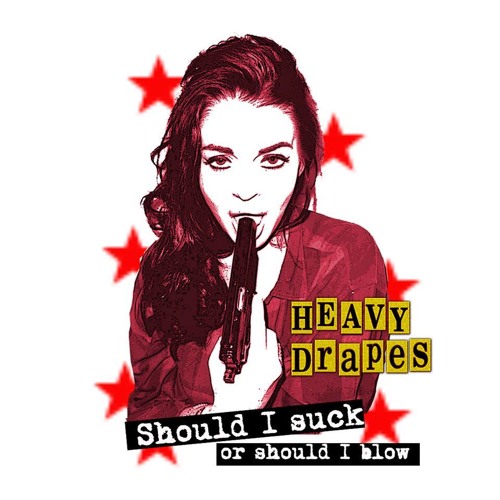 Bringing the style and sedition (and the rock n’ roll) back to punk. Ladeez and gents! Louder Than War gives y’all Heavy Drapes! Joe Whyte enthuses.

I see and hear my fair share of contemporary punk, both local and otherwise. While some of it is very good (Archive 45’s, Vikki Vortex, The Snipes, Red Eyes, The Eddies and The Zips to name a few), a lot of it is lumpen, lowest-common-denominator punk-by-the-numbers and is as far from the original notion as to be virtually pastiche.

Punk, to me, was all about the style, the open-mindedness, the insurrection,the absorption of the new and damn it, it was sexy, too. Too many bands seem to have forgotten (or never known this) and are content to batter out the same moribund, dull-as-dishwater dirges about “the system” ad finitum. Frankly, it’s not good enough but thankfully there seems to be a new/old breed who are bucking the trend. 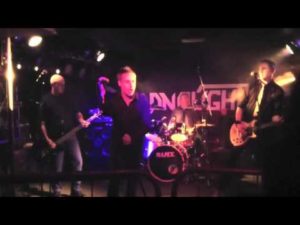 Heavy Drapes are a band out of Edinburgh who briefly formed and gigged around 2007 but literally imploded almost immediately in what seemed like a calculated, classic piece of situationist self-destruction. Frontman De Liberate has reformed the band and they are profiling heavily at the moment with the intention of “playing every toilet venue in the land” and believe me, these guys will do just that. and whatever else it takes.

In a previous life, Mr. Liberate was Garry Borland, erstwhile main-man with the shouldabeen-couldabeen-famous Baby’s Got A Gun. If there ever was a band in the wrong timezone it was them. Sex Pistols attitude and guitars ablaze in the midst of rave and baggy was as futile as it was reckless. Incidentally, their album “Up” is being re-released next year, too. This was the band that sent wraps of white powder (talcum, apparently) and little straws with their single to journos as a promo gift and art-as-ridicule statement. Needless to say, the local red-top press had a field day…

Anyway, back to Heavy Drapes. They’ve a demo doing the rounds as a trail for an album and if the four songs on that are an indicator, the LP will be quite something. The songs are clever, catchy and razor-keen and have all the ingredients and attention to detail that make the best punk and roll records positively sizzle. With a healthy (should that be unhealthy?) dose of decadence that has been the DNA of the best sleaze-punk over the decades, Heavy Drapes are bringing the attitude of The Heartbreakers, Dead Boys and The Dolls screaming like a needle-pricked harpy into the 21st century with some righteous, downtrodden chic.

Hanging Like A Suicide is a blistering, breathless train-wreck with thrills to spare. Rikki Stiv (they’ve all got intentionally silly punk names) plays guitar like the offspring of a collision between Johnny Thunders and Lita Ford. Squalling, sloppy leads and coruscating power chords lay down the law. The vocals are smart and inventive and the drums and bass rock like the proverbial locomotive.

(I Wanna Be) Maladjusted  is similarly classy. With musical nods to NYC in the 70’s and lyrics to match, it’s part tribute and part compliment and a whole lot of good fun. The verse where the vocals intone “ramalama lama, fi-fi-fi” after each line are just sublime and quite frankly show Primal Scream how to lift something from an influence and do it properly.

Into The Blue has some neat “Sha la la” glam backing vocals and again the lads bypass all the dullard punk cliches while still keeping the energy, power and sheer fire of the best of the class of ’77. It’s my favourite of the four, too. With single-candidate Should I Suck Or Should I Blow making the most noise with it’s chopping, angular chords, this is a band that are going places. The band are gigging regularly and have London dates pending.

This is the new punk. Forget the old punk.

Heavy Drapes can be found on Facebook and Bandmine.