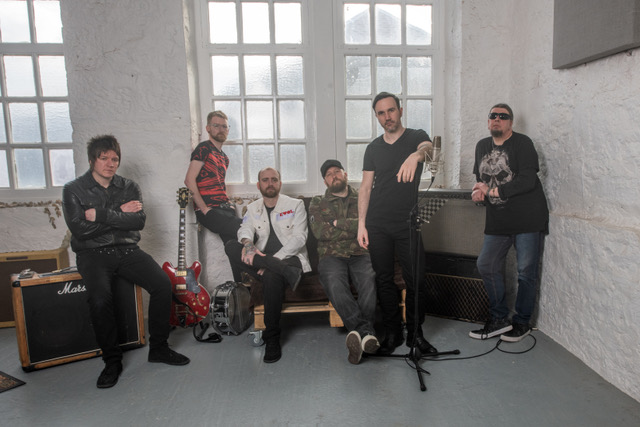 Dundee-based alt-rockers Emerald Sunday chatted to Louder Than War about their new hometown, their new single and everything in between.

An act destined to join the fabled ranks of Scottish rock royalty, are Dundee’s Emerald Sun. Bridging the gap between heartfelt Scottish folk and uplifting indie rock, the sextet provide a tried and tested indie rock formula with a distinctly Scottish twist. And it’s all the better for it. We caught up with the band to talk all things Emerald.

Hey guys, thanks for taking the time to answer our questions. Hope you’re well?

No Problem, a pleasure.

You’ve just released your single What Becomes of You. What has the reception been like so far?

It’s been amazing to be honest, its great to hear the positive feedback from some of the dJ’s that’s played the track. Onwards and upward hopefully, bring on the next one!! We’ve had some amazing reviews from magazines etc too, we’re very grateful and so humbled by the reaction.

The track itself is quite expansive and emotive. What’s the story behind it?

Well, I was actually in the middle of writing another track for an upcoming recording session but I just wasn’t feeling it and kind of abandoned it. Just as I was about to put the guitar down I started playing a few chords which ended up being ‘What Becomes Of You’. It’s one of the magic moments in songwriting, came out of nowhere and was written in around half an hour. It’s quite an emotional and powerful track asking the question, what happens when to that special bond with a loved one after we go to the other side, Is there something else, somewhere else where we carry on? In fact the whole album is quite emotional and touches on mental health but in a positive way, it’s actually a feel good album with some proper rock anthems!

The ‘expansive and emotive’ sound is something seen quite often in Scottish bands, always to great effect. How typical a sound Scottish sound do you think you have, if there is such a thing?

Mmmm… I’m not sure actually, I struggle to put us in to a certain genre; I guess with Mike’s accent you can tell we are a Scottish band. There is a twist of folk in most of the tracks that I write. When I started writing I was influenced by the likes of Del Amitri, David Gray and other melodic acoustic type of bands. We’ve a song on the new record called ‘Close Your Eyes’ which is very Scottish with a big folky chorus, it’s going down well at gigs.

Six people in a band is quite a large number of members. Have you found this has ever hindered the creative process behind the band, or is it more of a benefit, with more people able to bring influences and experiences to the table?

Having the keys in is a massive step forward for us! It wasn’t something we were intending on doing but whilst recording the new album nearly every track ended up having keys on it so we thought to create that live we’re gonna need it. The creative process hasn’t changed really, I’ll bring a song to the table and everyone kinda joins in and if it works it works and if it doesn’t we move on. The thing I love about this band is that we all like different music, none of our influences are the same which makes the end product sound like Emerald Sunday

You started out as a local covers band. How long did it take before you realised you wanted to be writing your own material?

Well it was a gradual thing really. I had been writing for years before the band started so I just brought some in and jammed them to see which ones would work and if it would work which thankfully it did. We started out with a set of around 30 covers with 4/5 originals in between and they were getting a great reception. Fast forward ten years and we know have over 50 original songs to choose from. It’s been quite a journey actually and here’s to the next ten.

Though perhaps not as far away as the likes of Aberdeen or Inverness. Dundee seems reasonably removed from bigger musical cities such as Glasgow. And even further still from the likes of London. Have you ever struggled because of your location?

Yes, definitely. We tend to gig down south quite a lot, around Yorkshire way, the guys know how to do it down there. There are still great venues up here but it just not the same as say 20/25 years ago. It’s difficult but we like a challenge. We’re actually from a small town called Kirriemuir, well 4 of us are, so it’s even tougher.

Similarly, have you found that because of any potential geographic restrictions, those bands in and around Dundee have a stronger sense of community than perhaps would happen in other towns or cities.

Yeah, Dundee has a great vibe about it’s music scene, a sense of togetherness I guess. There’s lots of open mic nights and small festivals in and around the city and some of the talent on show is great.

Finally, as we go in to the second half of 2019, what can we expect from the band?

Well, I’d love to tell you all about what’s coming but can’t at the moment unfortunately. We will have some major news coming soon but until this happens we’re in a bit of a limbo and I can’t say too much. The record is done, mastered and ready to go and have an idea of the next promo single. We don’t want to rush things so we’ll see what happens in the coming weeks, it might even be next March at the latest, who knows. We wanted to put out ‘What Becomes Of You’ as a bit of a taster really, what to expect from the new LP. It’s without a doubt our finest work yet mainly thanks to Richard McNamara of Embrace who produced the album and played on most tracks. Although it’s quiet on the gig front we know what we’ve got in the locker so it’s all good. Looking at an 8 or 10 date tour when it comes out. Exciting times.

Thanks for taking the time to answer our questions.

An absolute pleasure, thanks (Alan Hunter)