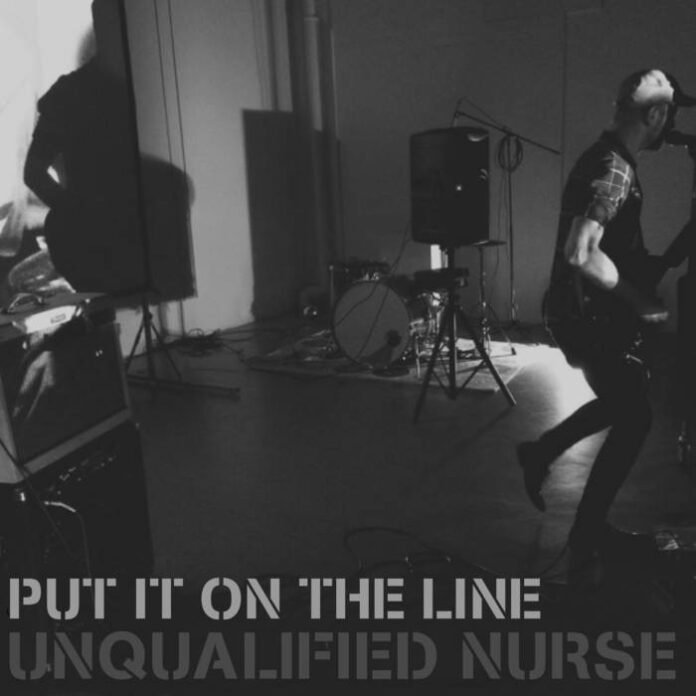 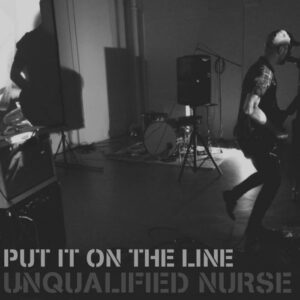 Louder Than War’s Ioan Humphreys previews new Derby-based band, Unqualified Nurse, and their latest self-release Put It On the Line.

Ok, so as a rule of thumb, if I start playing some Bandcamp tracks and 10 seconds in my 13 year old daughter shouts “put it off dad!!!” and my girlfriend shouts “what the hell is that? Can you please turn it down!??”, then I am going to love this. Derby’s 2 piece eardrum-botherers Unqualified Nurse give us Put It On the Line, a five-track EP recorded in “one evening” and clocking in at just 5.33. But what a 5.33!! The album maybe short and sweet……ok just short (it definitely aint sweet!) but there are plenty of scuzzy ideas crammed in there.

First off, the production is so filthy that I have no idea if there is a drummer doing anything. There is a photograph of a drum-kit on the Bandcamp page, but if there are any drums, they are so buried in the quagmire of fuzz, it’ll take a JCB to fetch them out. Which is ironic really as Unqualified Nurse sound like they are in charge of a JCB digging up Link Wray’s corpse and asking for some guitar tips.

And there are plenty of riffs here too, as well as a GREAT name and a DIY attitude. The singer has a really great rock and roll voice that has a distinct Lux Interioresque sound to it that gives them an edge that takes them past some potentially lazy DFA 1979 and early Royal Trux comparisons that ultimately verge on the Garage/Psychobilly. These two seem like they are channeling Link and Lux, whilst also bringing their sound full circle with uncompromising dissonance, albeit with a tune. Hence, they have a song called Kim Gordon/Iggy Pop Supergroup which immediately screams Free Kitten and Body/Head. Not bad company to be in with to be honest.

Again, these five tracks just shout quick and dirty, but I like that! I like my ears to hurt now and then. I like a sonic battering of an evening. Doesn’t anyone?