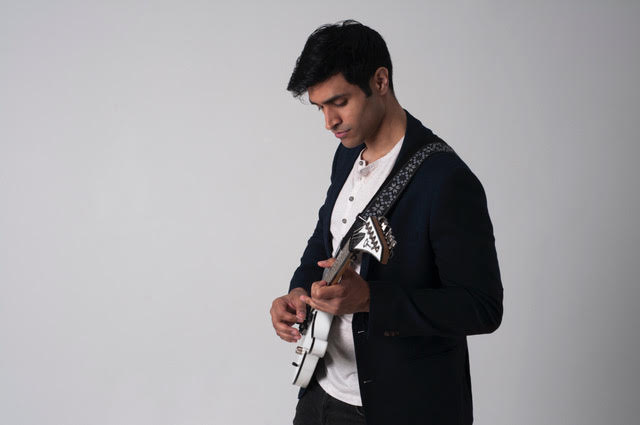 We caught up with Kent-raised, London-based singer songwriter Jaz Mattu following the release of his recent single Photo Cache.

Jaz says: ‘Photo Cache’ is a song about the Faustian pact that artists and musicians have to make with social media. How you part take in this world and it slowly chips away at you”.

The video features a plethora of cardboard box opening from one young lady – who in the video, becomes a world wide sensation… and then Jaz, who doesn’t! The single has been picking up radio airplay all over the country – and beyond – and Jaz hopes that he can get more views of the video than his attempt of cardboard box opening. The single Photo Cache is featured on his album Sanguine Man and follows Gosh you Can Talk. We caught up with Jaz following the single’s release:

Hi Jaz, thanks for taking the time to answer our questions. How’s things with you?

Hi, yeah everything is good.

You recently released your debut album, Sanguine Man, what have the reactions been like to that so far?

The response has been good, a lot of people have been saying to me that it’s very original, which is always great to hear.

It’s a record that features a fairly diverse set of genres/influences, a fairly atypical approach to creating an album. What was it that made you decide to write the record this way.

Well I wanted the album to be sort of an adventure/exploration of the various moods people have and how we move between them. For example we’re all happy some moments, jokey the next, then we can be angry and then suddenly we are reflective. If you’re like me, all those moods I’ve listed can happen over the course of one morning (haha). I wanted the music to reflect that. Although I’m generally an optimistic person regardless, hence the album name ‘Sanguine Man’.

The idea for the song came around me first thinking about doing original music and hearing fellow musicians talk about the importance of Social Media in today’s world. Although Social Media has many merits, I’ve always been a bit sceptical about some of the more popular aspects that people portray on social platforms which seem utopian. I also find it amusing at the sort of personalities that have been born through it and their adulation in the world. There is also a dark side to it, given how much abuse some people can receive online etc.

However, knowing all this…it is needed to gain and grow a music following these days. The song is my satirical take on the “Faustian pact” you have to make with it, despite your grievances.

Do you agree that there’s a certain sense of irony in doing press for a single that harbours such a narrative?

Of course, the irony of promoting a song about the Faustian pact of using social media as promotional tool is not lost on me. Though I tend to go for the post-modern/meta approach towards it. Perhaps the next step is writing a song about this interview.

The video for the single is great. How did you come up with the concept behind it?

Well for my last video single, ‘Gosh You Can Talk’, we went with a more dark comedy approach and people really liked it. So I figured I do something similar again.

The idea for the Photo Cache video came about after I read an interview in a paper with a social media star. I then checked out the said interviewee videos and they struck me as uniquely dull. I then thought about what was the blandest thing someone could conceivably become famous for and the idea of opening up a box seemed appropriate.

I then discovered there are thousands of videos online dedicated to people opening up packages others have sent to them. The idea basically evolved from that.

Was it as fun to film as it looks or did you come up against any issues during the shoot(s)?

Oh it was great fun and we laughed through the whole day.

It’s always tricky trying to sell these types of video ideas to people, especially if they are used to just filming bands in warehouses looking cool. Lucky I found a good team through a friend. Once you have a good team, things generally work well on the day. It’s important to see through ideas that you think will work well.

The actress Agne was great and very professional throughout all of it. Which helps massively.

Finally with the album release now behind you, what can we expect from Jaz Mattu as the year progress?

I’ve got some brand new singles for 2019, which will be out soon. I’ve got music videos in the pipeline for them too! As always I will be gigging around this year. Overall, I’m looking forward to what this year brings.