Despite already releasing two full length albums, Barnsley’s Bruja are experiencing somewhat of a re-birth and in the run-up to releasing their debut EP, have deleted all of their previous output. Is this eponymous release the defining statement the band had hoped for? Louder Than War’s Jason White talks us through this new alt-rock trio.

Every once in a while, here on my local music scene in Barnsley, I discover a band that takes me right back to my teenage years and reminds me of a time when I wanted to be in a band and when music was the be-all and end-all. Here in this great metropolis, the latest band to do that is Bruja.
Pronounced Broo-ha and meaning witch in Spanish, this alternative rock three-piece are a pleasure to both write about and watch on the live circuit. They do everything in the right way. They have a social media presence that suggests they both work hard and have fun. When they share their news and updates, it is always done so with the best kind of enthusiasm. They have a look that suits their music and not an ounce of arrogance about them. In fact, you’ll often see them in the audience for many other local gigs too, supporting the scene as much as they can.

They started off like many teenage alternative rock bands do – their first gig being plastered with Nirvana covers. However, since they first appeared on the scene two years ago and shortly after I first discovered them, they have recorded and released two full length albums, Odium and Midnight Tales. Both were lengthy and often of demo quality, but they were replete with quality songs, tonnes of ambition and scattered with ideas that showed great flashes of potential. For a band that was playing 30 minute sets to a then small fan base, there was too much going on to pin down any kind of direction, but their sense of adventure was admirable and gained them plaudits from both rock and indie scenes respectively and I knew that if I was fifteen years younger, Bruja was the band that I’d want to join. 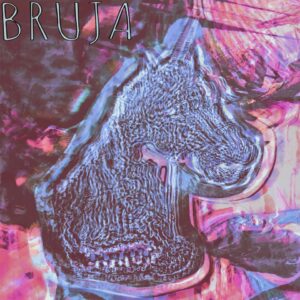 Their music constantly flipped between dark and light, heavy and soft and used atmospheric and often whispered female and male vocals to full effect; one minute sounding like Melvins or Sabbath, the next Violent Femmes or The Pixies. I really wanted to see this band that I loved go to the next level and really work out what exactly Bruja was, spend some money on some quality production and studio time and produce a fantastic EP.
They have since played all over the region, forging alliances with bands such as Hands Off Gretel, Yawning Dog and Demur and supporting the likes of Allusondrugs. They have also earned themselves quite a following along the way.

They are now on the cusp of releasing a debut EP, recorded at 2Fly Studios (65 Days Of Static, Hey Sholay, The Long Blondes). To celebrate this re-birth, they have deleted all trace of previous recordings. This sophomore effort should be their defining statement. Bruja have been working hard, honing down their sound and rediscovering exactly what Bruja is. Spread over six tracks, Bruja shows a band that have come on strides. 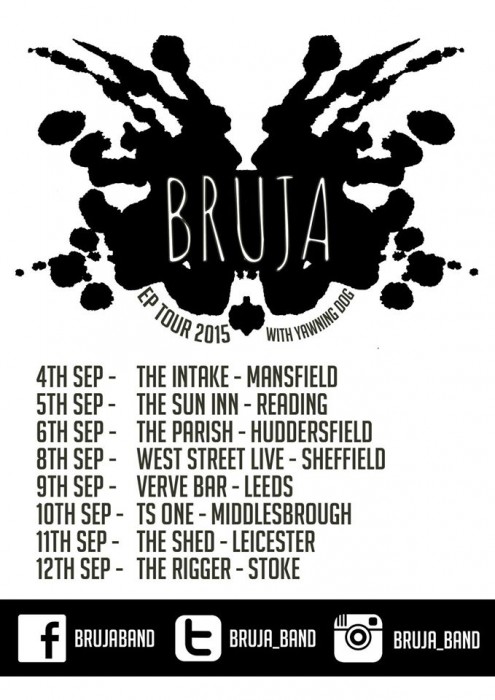 ‘Horsey and You’ was the first track to be released as a single last month. This slice of grunge-lounge-psychedelia is a song about going for romantic strolls on the beach with your favourite horse. It’s laid back groove, jangly guitars and fuzz rekindles fond memories of Ringo Deathstarr and Giant Drag. In a recent interview with Sheffield’s Counterfeit Magazine, Del explained ‘We’ve a song about a horse, one about a bee, one about a dog, one called Fox Sox, things that make us happy. We don’t want to be too serious.’ I really like that about them.

‘Sugar Baby’, the second video to be released (filmed on vintage VHS film) slinks along in a similar manner and this time round Del’s drawl sounds like Melissa Auf Der Maur battling against The Cramps with lazer guns, backed by the soundtrack of Nirvana’s Incesticide. It’s a glorious, chaotic mess and both tracks are easily my highlights of the EP.

‘Buzzy Bee’ smacks even more of Auf Der Maur, and that is definitely no bad thing. And like the latter’s debut solo album, this also sounds like it could sit comfortably alongside those QOTSA records in your collection. Closing the EP is ‘Bon’, a re-recorded track lifted from their Midnight Tales album. It was a highlight then and here it stands out as a beautiful oddity. Like Horsey and You before it, this is a love song about a dog called Bon. Driven by a bass-line that rolls around like a giddy puppy; this time round the song is improved upon with added backing vocals, extra fizz and a playfulness that reminds me of early Flaming Lips. 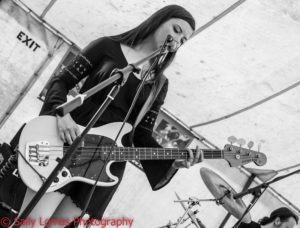 It pleases me no end to hear that Bruja have found a sound that totally suits them. Here they sound comfortable and have retained all of those elements that I loved about them first time round. The decision to have Del on lead vocals has paid off too. And even though it seems that they have made all the right decisions, I get to thinking that Bruja won’t be tied down and EP #2 will be totally different again. After arriving on the local scene two years ago with two full length albums, it is actually this short set that is their defining moment. ‘Bruja’ is a fantastic collection of songs, one that no doubt will show off the band at their best in a live setting. I can’t wait to see them play it live and I’m definitely looking forward to following another year of Bruja.

Bruja release their self-titled EP via bandcamp on August 14th and tour the UK this September. You can also find Bruja online on facebook, soundcloud and at bruja.co.uk

More videos by Giannis Kipreos can be found at www.youtube.com/user/gianniskipreos/videos

All words by Jason White. More writing by Jason can be found on his website: alternativebarnsley.com. Keep up to date with his work also via Facebook and Twitter: @altbarnsley. His Louder Than War author’s archive is here.