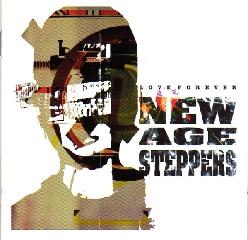 Dedicated to my friend Andi (formerly of the AK 47’s) Get well soon.

A press release has never brought a tear to my eye before, but this one did.

Adrian Sherwood and Ari Up first met in 1978 and formed a long-lasting friendship and musical partnership. Whenever they met up in the UK, they worked together on a then-untitled album. The first of the recordings for that album began a few years ago with the song Conquer, then in 2008 Ari Up was diagnosed with the cancer from which she would die just two years later at the end of 2010. With her unquenchable passion for music, she maintained that she and Adrian would finish the album they had begun. And they did. Sherwood flew to Jamaica where they completed the recordings for what now named Love Forever. The albums title is the name of a track on the very first New Age Steppers album from 1980; often when Ari signed anything it would read Love Forever…Ari. In addition to lead vocals, Ari Up is also credited with drum programming, bassines, and keyboards. All tracks produced by Adrian Sherwood. This latest offering from New Age Steppers is the culmination of 30 years of friendship and love between two of Britain s brightest and creative cult talents.

Losing someone with such a huge personality as Ari Up must leave a massive gaping hole in the lives of all who knew her well; her friends and family.

Even as a mere fan, someone who bought her records but only saw her play live twice and who spoke to her for only two brief but sparkling, unforgettable minutes, I miss Ari-Up more than I’ve missed any other departed ”Ëœpop-star’.(More than Sid, Malcolm Owen, Ian Curtis and Kurt? Yep, because somehow their premature deaths were inevitable, unavoidable, Ari’s was just tragic, cruel, too soon.

She would have made the most fabulous eccentric geriatric. A mad old lady of ninety years old, stlll with those dreads, that laugh, that trilling bird-call, native American war cry, still showing her knickers”Â¦. But it wasn’t to be. This is, one assumes, her last recorded material. Made with old friends and associates, with love, forever. It’s billed as New Age Steppers, its indisputably Sherwood mixing and producing the wonderful sounds. The other members of the collective on this album include Denise Sherwood, N. Coplowe, Skip McDonald, Dave Wright, Filipe Tavares, Ghetto Priest and Adamski. But the album is dominated by Ari’s presence, voice and ideas. It’s not a ”Ëœghostly’ presence ”â€œ its sounds so vibrant and alive ”â€œ that it just makes it all the more unbelievable that’s she’s gone.

A quick track-by-track run down goes something like this;

Love Me Nights
An instant classic, a great Pop song, very reminiscent of Neneh Cherry (on her second album the criminally under-rated Homebrew). About a partner that “Hate me days, love me nights, we don’t have ”Ëœproper-couple’ fights”Â¦”Â.

The Scheisse Song
(Translates as the Shit Song) Lovers rock nursery rhyme sung in German ”â€œ although pee-pee, kaka, poo-poo are a universal language I guess. Seems to be a multi-lingual list of names for shit!

Musical Terrorist
Oh dear. As a title its regrettable; Ari wouldn’t’ve really wanted to inflict pain and terror on people”Â¦ so she spends the whole song explaining exactly what she means by the phrase, concluding that one mans freedom fighter is another mans terrorist. And its not people she wants to terrorize but ”Ëœevil institutions’.

The Worst Of Me
Hard to describe musically; digi-dub with sampled strings, another relationship song. She didn’t seem to have had the happiest love-life if this is autobiographical. “Was our love for real?”Â Honesty and communication are the key.

Death of the Trees
Instrumental with little motifs picked out on xylophone – then on a variety of keyboard sounds (double-bass, piccolo ”Â¦) very plaintive and melancholy.

It’s a joyful album on the whole but with sad contemplative moments A wonderful collection for fans of On-U and the Slits and a fascinating, inventive and strange album for newcomers to the label and bands work.