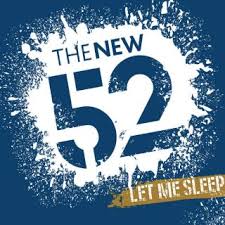 The debut album from Darragh Cullen’s The New 52 project disguises the fact that he’s the man who is in control, pretty much same as it ever was as with his previous two solo albums.

Not completely and utterly solo though, with the album produced by legendary singer / songwriter Boo Hewerdine who also adds a touch of vocal as well as a clear influence in the writing / arrangements and general support and thumbs up. In the guise of The New 52, the pair take on elements of experimentation with unusual sounds in a short album of short songs in contrast to the more freeform nature of  ‘Whispers & Silent Screams’. Mission accomplished.

And this time with a band moniker; the suggestion of  Hewerdine, hence the re-labelling from being the next  Cullen solo effort to reflect more of a band vibe, despite all instruments played by Darragh,  bar some pedal steel from Gustaf Llunggren and percussion / Casio from Chris Pepper.

The songs are packed with the influences which call to mind the  Foo Fighters, U2, The Beatles and Simon & Garfunkel. It allows an appreciation of  why there’s a retro sound housed in a contemporary coating and a  distinct Beatle-y pop on the opening tune  ‘Coming Home’ along with  a Matt Bellamy styled vocal  appearance. Acoustic indie atmospheres sit side by side with the country roll of ‘Good Intentions’ and the more stark hard rock riffing on  ‘Over’ which has far too short a shelf life – it’s a riff that deserves more exposure.  One  of several songs dealing with sleepless nights, the stripped back and easy  ‘Song For Sara’ provides the lullaby moment to end half an hour of pleasant and melodic pop songs.

You can watch ‘Turning’ from the album here: