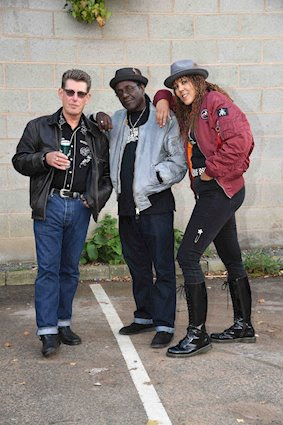 Always a sucker for a bit of Ska I was excited to hear this news from the old skool master….. says Wayne Carey

The Specials were one of my coming of age bands and having tasted the aftermath of punk I was bowled over by the Ska scene that hit the charts of my youth.

Remember that people my age were the Top 40 ‘pause and record’ brigade with our cassette tapes at the ready and a pencil standby for when the fuckers decided to get caught in the spools. Call me an old fool if you want but, those were the days. This press release got me all nostalgic but in a new music vibe….

“Always the life of the party, Neville and Sugary Staple once again show that fun and excellence indeed can go hand in hand. Pure pleasure of listening from beginning to end and a vibrant sight to see. Ska doesn’t get any better than this” – Big Takeover Magazine

Ska royalty Neville and Sugary Staple have announced their new collaborative album ‘Rude Rebels’. It will be released via Cleopatra Records on both CD and special clear vinyl with black and white splatter in time for celebrations for the 40th Anniversary of 2Tone Records.

‘Rude Rebels’ is full of original upbeat music with vocal statements on life, fashion, love and morals, plus some smooth reggae vibes. It features brand new songs and recordings from Neville Staple, legendary singer and toaster of The Specials and co-founder of Fun Boy Three, and his partner-in-crime Sugary Staple, as well as former Specials’ guitarist Roddy Radiation (a.k.a. Roddy Byers).

With 2019 being the 40th Anniversary of The Specials and 2Tone Records, this is a timely release. This album follows Sugary Staple’s sold out ‘Rudegirl Sounds’ EP and Neville Staple’s ‘Return of Judge Roughneck’ double album, also released via Cleopatra Records.

The Staples are a permanent fixture of the widely regarded and enormously active ska scene in the UK, performing regularly at both clubs and massive festivals. In the Neville Staple Band, who have been actively touring both at home and abroad, Sugary joins Neville Staple to front the band.

Sugary and Neville wrote and produced this rebel-lishious offering, alongside Tom Lowry (The Specials, Neville Staple, Spectrum) at Planet Studios in Coventry, which brings a super blend of punked up anthems, dancehall ska and sweet rebel reggae and bluebeat.

“The album was produced with our love of punk, ska, 2tone and reggae, which we mixed into an indulgent sub-culture blend. A bit like me,” says Sugary Staple.

“Working alongside Neville on the production was just perfect. He gets me, and he understands where I am at musically and about my promotion of women going for it, regardless of age and situation. We both still have something to say in our productions, while still creating a dancing beat or a sing-along vocal.”

“I felt really free on this production. Having the freedom to be creative with someone on your wave-length is really refreshing for me. I love how we celebrate the great musical genres of my 40-year career. There’s a little taste of The Specials in there, a Clash type of punk vibe and even Trojan Records styles. We’ve been touring some of the songs and the fans have gone nuts for it. Great to have my buddy Roddy on board too,” says Neville Staple.

As of September 28, the ‘Rude Rebels’ album will be available on both CD and special clear vinyl with black and white splatter. However, the album can already be pre-ordered digitally via Bandcamp and via Cleopatra Records directly.

Words by Wayne Carey who writes for Louder Than War. His author profile is here and you can catch his blog at wayneacarey1970.blogspot.co.uk    Photo credit : John Coles.

**You will know from the BBC and mainstream media that Neville’s grandson was killed last week. Everyone at LTW sends him condolences & love.  This album /tour was scheduled before the tragedy but will go ahead we are told,