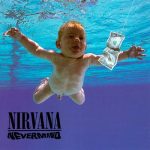 Artist Ed Chapman has now finished the commissioned ‘Nevermind’ mosaic, we have been following on his progress (Pt 1), (Pt 2) as he painstaking recreates the iconic sleeve design in ceramic mosaic.

A unique mosaic of the cover of Nirvana’s classic album Nevermind has been completed by artist Ed Chapman. Ed has been working on a ceramic tile version of the 1991 seminal album for several weeks, after being commissioned to create it. It is now complete and is ready to be taken to its new home. 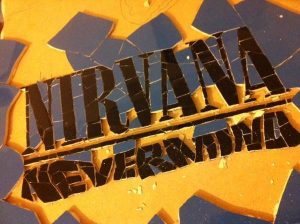 The piece of work is a mosaic representation of the ‘Nevermind’ cover, which shows a baby swimming towards a dollar bill and Ed created it after cutting large tiles into tiny fragments, which are painstakingly placed by hand. The size of the piece is 30×30 inches.

The artist, who is self-taught, discovered more than 10 years ago that he had a talent for producing highly accurate, unusual portraits from piece of torn paper and the first piece of work he ever created was of Nirvana frontman Kurt Cobain. Ed later decided to move on from paper and started creating ceramic mosaics and has become known as one of the country’s most successful ceramic artists.

He said: “I’ve been commissioned twice in the past to do tile mosaics of Kurt Cobain… I’m always keen to take on different challenges in my work and I will discuss with clients what they’d like and what colours will work best” continuingI happen to be a bit of a fan of Nirvana, so it’s always good when I get to work on someone I have a real passion for”.

Ed, who works from his home in Manchester, has exhibited work around the world and has created album covers in the past for lovers of music and art.

He said: “I’ve never tackled Nevermind before. It is a great album cover and it wasn’t easy to do because the original photograph has a lot of darkness and light, which is actually very difficult to emulate in the medium of mosaic… I feel I have captured the essence of what the album cover’s concept is” Speaking to Ed it was obvious that this piece of work whilst challenging was also enjoyable to work on…It’s been hard work, but great recreating the artwork of an idea of one of my musical and artistic, in the wider sense – heroes. I found out that Kurt Cobain had the idea for the photograph on the front of the album after watching a TV programme about water births…And it’s a really interesting idea the fact that we’re chasing money since the day we’re born.”

When an art-lover commissions a piece, Ed will discuss what they like and what will work as a piece of art.

Ed places each and every piece of tile himself, some of which are millimetres in size, often while listening to his favourite music. He listens to BBC 6Music while he works on the piece as that station plays a lot of his favourite bands, such as the Jam, the Stone Roses and, of course, Nirvana.

When all the tiles are in place, the piece of work is grouted and buffed to a high shine before being presented to its owner.

Ed added: “I have lived with this picture for a few weeks and can honestly say I do admire it and I feel an attachment to everything I create…It may sound arrogant, but I am really pleased with it and I hope its owner is thrilled with the result”.

Chapman is currently the subject of a major exhibition of his work; The exhibition runs from May 4 to June 13 at the Playboy Club at 14 Old Park Lane, London Non-members are welcome.

For more information about Ed Chapman, see his website www.edchapman-mosaics.co.uk