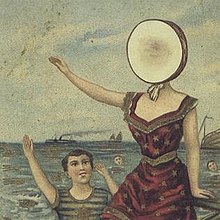 In The Aeroplane Over The Sea

With “deep listening”, album listening parties, and rediscoveries being a key musical part of the current isolation, I’m currently writing about albums I love that I haven’t previously written about worth exploring. Today I’m turning my attention to an all-time favourite of mine, and so many others.

Writing about it in the current environment puts a whole new slant on why it might just be the perfect record (in my opinion) during lockdown for those previously unacquainted with it. Where some good albums simply get in your head, this gets actively under your skin, both musically and lyrically.

Released in 1998, at the time Neutral Milk Hotel were a reasonably acclaimed lo-fi band, but this odyssey of oblique lyricism and expansive musicianship put them into a whole new league, with front man and maverick lyricist Jeff Mangum’s unwillingness to explain too much of it pushing it into deeper enigmatic territory.

The music achieves something special – a feel of lo-fi distortion mixed with huge, sweeping sounds containing everything but the kitchen sink. It’s paradoxically sepia-tinged on a technicolour scale. It’s got an epic beauty which in spite of being a relatively short record feels epic, as if the listener has “experienced something really big,” as fan Richard Reed Parry of Arcade Fire puts it.

The juxtaposition of the profound beauty of the music with the unflinching fleshiness of the lyrics is what defines the record. It’s conceptual if not quite a concept album, with the story behind its running theme – a series of dreams Mangum had about going back in time to save Anne Frank – all part of its mythology.

While Mangum has never elaborated too much on the lyrics, a pre-existing knowledge of their roots fills the record with truly heartbreaking moments. We hear of dreams of her being alive or reincarnated, speculation over her burial with her sister and mother and thousands of other families, and the truly devastating two headed-boy with the needle in the jar (anyone with an awareness of the story of the two-headed boy preservation thought to have acted as a radio conductor in a concentration camp will find it impossible to leave unaffected.)

But it strikes me that it’s the aforementioned physical nature that allows In The Aeroplane Over The Sea to root itself deep into the listener. By being so open on the human body, the record draws itself into the body. Sometimes the body and nature mix, where semen stains the mountain tops and plants grow from ovaries. Knives are stuck in shoulders, fingers are laced through the notches of spines; things lie in strangers stomachs.

The darker the lyricism, the more beautiful and buoyant the music, spreading through the listener – for example, how Holland, 1945 talks about the faces filled with flies and the white roses in eyes just as it builds to a triumphant climax. Frequently promises of something delicate are juxtaposed with something physical.

The stunning title track, for example, holds some of the most prettily reflective, tattoo-friendly lines of past 25 years on the strangeness of human nature and how “For now we are young / Let us lay in the sun / And count every beautiful thing we can see.” When it reaches that “bodily” line about “I would push my fingers through / Your mouth to make the muscles move,” that in itself is actually lent a strange beauty of its own.

The theorist Julia Kristeva makes much of our harmful denial of the realism of the human body and our need for more openness; this is a record that proves that, laying everything open in a way that becomes oddly cathartic. The way opener King of Carrot Flowers, Part One features the line “We lay and learned what each others bodies were for,” certainly sets the scene for the whole record.

Instrumental interludes give the feel of marching bands inviting the listener to stick their head out the window and see a parade for some unnamed victory. Every element of the record has some element of obliqueness, not just the lyrics – whether it’s the mysterious vintage-style surrealism of its classic artwork or the way that the various instruments weaving in and out of the distortion are not all identifiable.

There are certainly some elements which are best left mysterious to keep the magic. Of course, these words are just my interpretations and perceptions and everybody’s will be different. But for me it is the perfect album for these times, for the previously unacquainted seeking something to get truly absorbed into, to find a record they can step into, analyse as they will, and like me and so many others, simply fall utterly in love with.

All words by Amy Britton. Find more on her archive https://www.louderthanwar.com/author/amy-britton or via Twitter (@amyjaybritton) and Instagram (@amy.jay.britton)