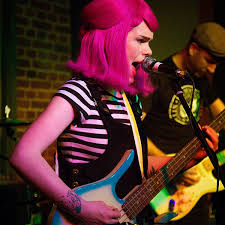 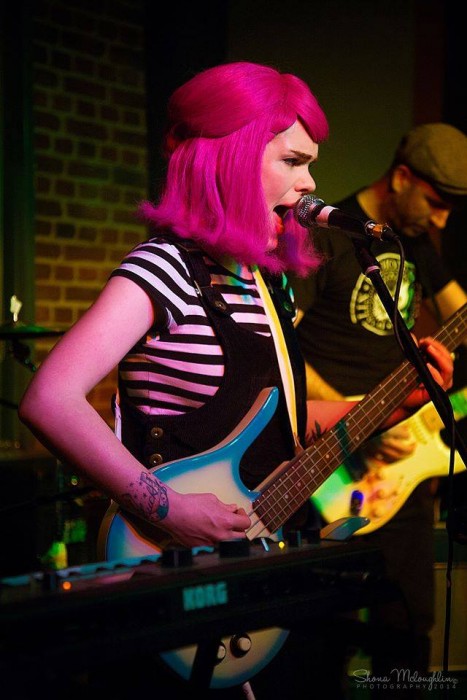 It seems like just a month since I was reviewing Get Back in Line, the excellent album/tape on Odd Box Records by Nervous Twitch. Hang on, it was just a month. Well never mind, at the risk of repeating myself, I’d urge you to investigate this four-piece from Leeds sharpish, if you have an ear for catchy, effervescent punk-pop.

Three highlights from the aforementioned album have now been thoughtfully encapsulated for all time within a seven-inch slice of beautiful blue vinyl, the perfect way to keep up to speed Twitch-wise for anyone who, like me, absurdly invests such trinkets with mystical properties. Or who doesn’t have a cassette player. Or a computer, in which case I suppose you must be reading Louder Than War in the library or something.

Anyway, in case you’ve yet to be exposed to the joys of Nervous Twitch, here’s a quick look at the songs in question. Lead track Jonny’s Got A Gun is the most straightforward punk offering here, ripping effortlessly through each and every chord known to the Ramones. Lyrically, it channels the doomed-teen-love anthems of the great 60s girl groups. Our heroine is advised by her elders and betters that Jonny is no good. He’s got a gun, for Christ’s sake, so I tend to agree with them. I always err on the side of caution in these matters. That doesn’t cut any ice in girl-group land, however. Love will prevail, at least for the 100 joyous seconds it takes Nervous Twitch to belt this one out.

Next up is And We Did, another helping of Shangri-La style heartache set to a musical accompaniment straight out of New York City, although this time it’s the delicately weaving guitars and perfectly deployed tambourines of the Velvet Underground that are called to mind. There’s nothing ground-breaking about this stuff, as I’m sure the band would be first to admit, but the source materials are all tried and tested, and the band play with such winning charm and verve that they can’t go too far wrong.

The third song, however, is a different matter altogether. This Modern World would stand out in any company. It’s an enduring, solid pop song, redolent of classic early 80s hits by Martha and the Muffins or even the sainted Teardrop Explodes. The band take their time, leave a few gaps and build the tension before blossoming into a glorious chorus that’s been in my head for weeks. I love this track and its repeat appearances in Nervous Twitch’s growing catalogue suggest I’m not alone.

And there we have it. Punk Fox have put out a very tasty artefact that demonstrates at least three sides to Nervous Twitch. There are others too, as you’ll know if you’ve heard the album. But this is a great place to start, and it really is a lovely shade of blue.

Nervous Twitch’s bandcamp is the place to go for all their music here. They’re also on Facebook and Twitter @NERVOUSTWITTA