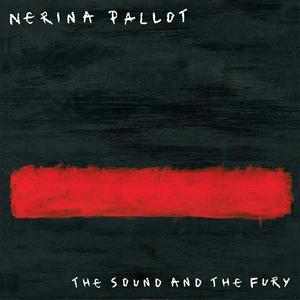 Nerina Pallot – The Sound and the Fury (Idaho Records)

Nerina Pallot has always been a songwriter with a pop sensibility who deserved more hits. But there has always been a hard edge to her lyrics that hinted at more depth than your average pop songwriter. From the moment There Is A Drum opens up her new album – The Sound and the Fury – you sense something different.

The song opens with an electric guitar. But this is an electric guitar skewed and twisted out of shape, it’s a sound calling from the wilderness, a lone sound that suddenly stops. Then the drums kick in. Heavy. Deep. Resonant. The music is aboriginal. The voice is both celebratory and accusing. There Is a Drum sets up the themes of the songs to come: it’s Biblical, it’s the life pulse, it’s Judgement Day. It’s both a celebration of the ongoing pulse of life, and a curse upon those who abuse it, a warning that their acts will be weighed in the balance.

The next song begins with industrial sounds, slowly an acoustic guitar emerges, notes ringing like barbed wire. The sound of human humming is like an imitation of a drill. Yet, as the song develops, it almost becomes a standard pop song of lost love and the devastation it causes. What lifts it above that is the blues and spiritual sound that permeates the whole album, and the utter nihilism of Pallot singing that she has nothing left to give.

From that moment of inertia we move onto Rousseau, with a guitar picking out notes like falling rain, and the hope that maybe philosophy can save us. Pallot has always been well read and not shy of quoting or referencing the great writers and artists from all ages. Rousseau’s most famous quote is: Man is born free, yet everywhere he is in chains. Pallot ponders if we really are born free, or just born again (a nihilist view?). Rousseau follows her as she sings. Haunting her steps. This is philosophy nagging at our routine and our indolent ways. And as she walks she feels the rain falling, falling like blood on a stark and asphalt jungle. The city, with its metal and concrete, and the need to escape it, is another theme running through the album.

After the philosophical angst we get the righteous anger – the fury. If I Had a Girl is Pallot considering the advice she would give a daughter should she have one. The music business, like most, is male dominated, with women being encouraged to flaunt themselves, sell themselves, in order to be successful. Anybody who thinks that women are equal only has to see the vicious attacks on any woman brave enough to take a feminist stance on social media. Pallot sings the spiritual, sings the blues, sings the protest song of women. She tells her imaginary daughter: Your no means no but your skirt comes into question. That you asked for it will be their suggestion. And be prepared to work the live long day for half the pay. Later Pallot declares: If I wear my skirt short, don’t mean I don’t have a brain. And if I cover myself from head to toe don’t mean that I’m in chains.

It’s a great song, jut appalling that it still needs to be written. There are no dicks on Page 3, but plenty who write on it.

On Handle the singer descends into existential angst again. It’s a beautiful song, starting with a piano that sounds like the distant drone of thunder. It’s a funny world, but she can’t get a handle on it. Pallot asks, pleadingly, to tell her that things will get better. She wants a sign or a prophecy.

On Spirit Walks – a simple, soulful incantation – nature itself becomes ominous with only the stars above (off Earth) guiding her. But she doesn’t fear because the spirit walks with her. Is this the spirit of music, of creativity? Something personal, or something outside of oneself? Something up there with the stars?

The Road is a haunting song. It has a broken up, staccato beginning sound. It is electronica mixed with African and Eastern sounds. It is the harsh sound of cityscapes, a sound of traffic hurtling through the night. Car lights bright, burning in the blur. Horns blaring. Get off the street. It is a song of a dark Messiah. A modern Moses coming forth to lead the people into a new paradise. It ends with a repetitive noise, like tramping feet. Does the road ever end? Do we ever get to the Promised Land? And if we did, what would we find? It’s a song that comes to you in the middle of the night.

After this Pallot gives us Blessed. She pronounces a new Beatitude: that blessed be the losers. Those who love and lose it all. Those who give and get nothing back. She opens it with a quote from T. S. Eliot that April is the cruellest month. Cruellest because it offers so much. Change. Hope. Hope can be the cruellest emotion of all.

It all ends with the Longest Memory. A song with no chorus, a seeming stream of consciousness sung over bare chords. The lyrics are dreamlike and haunting, with the music sparse. Pallot declares that loneliness is the longest memory and, perhaps, this is the bitterest truth of the album, that ultimately we are all alone.

This is a beautiful, haunting, thought-provoking album of grand ideas that have been fully realised. Pallot has matured from being a great singer/songwriter into an important artist. Where will she take us next?

Nerina Pallot can be found online here www.nerinapallot.com. She is also on Facebook and tweets as @NerinaPallot