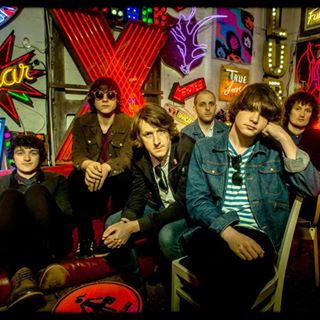 Louder Than War caught up with Scottish indie rock ers Neon Waltz ahead of their forthcoming tour and found out about their influences and how they waited for the right people to put out their first single.

It might be plausible to expect a harsher sound from this most Northern of bands. However, none of the austerity of the landscape of John O’Groats seems to have seeped into Neon Waltz’s music, only its rugged beauty.

Formed in 2013 the band has six members: Jordan Shearer, Jamie Swanson,
Kevin Swanson, Calvin Wilson, Liam Whittles and Darren Coghill.  Darren Coghill said: ‘Coming from such a small & remote place it’s inevitable you’ll end up spending lots of time with the few people who share the same ambitions’. With recent gigs selling out in their native Scotland, these ambitions seem to be more than obtainable.

Their last single Dreamers features crystal clear vocals and some very fine keyboards. This music is rousing and uplifting with enough punch to rise above the insipid. Darren Coghill said: ‘We took our time to find the right people to work with. It might have cost us some time but it left us with a finished debut record that we were seriously proud of and ready to show to everyone.’

The lads cite influences such as The National, The Walkmen, The Coral and The Band, but Darren Coghill says ‘It’s these bands that we agree on that bring us together but ultimately it’s the bands we disagree on that make us what we are.’ The band already have a solid following and are embarking on a tour of Scotland and England in February and the beginning of March. Those wishing to hear the strident melodies Neon Waltz produce live should take note.

More about Neon Waltz can be found here.

All words by Roxy Gillespie. More writing on Louder Than War can be found at her author’s archive. She Tweets as @RoxyG100. Her blog is found here.