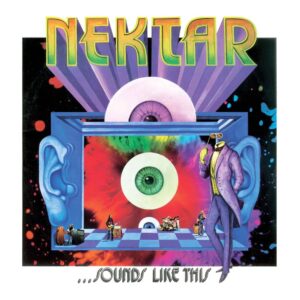 Newly remastered reissue of the German-based English prog/space rock band’s third album from 1973, set down on tape at Dieter Dierks’ famous studio at Stommeln. Also included is a second disc of album demos dating from October 1972 and February 1973. Ian Canty bee-hives himself…

Nektar were formed in 1969 by a rhythm section of Derek “Mo” Moore and Ron Howden, keyboardist Alan “Taff” Freeman and singer and guitarist Roye Albrighton, plus Keith Walters and Mick Brockett. The latter were two non-playing members who contributed to the group’s lyrics and did the lights for live shows. The band were English, but based out of Hamburg, Germany and their surroundings helped to give them a unique perspective on the type of progressive/space rock they played.

The fertile German music scene of the time teemed with bands such as Ash Ra Tempel, Tangerine Dream and Amon Düül II, who confronted prog rock jamming with an attitude that bordered on gung-ho aggression. This may have been because these groups move in the same circles as political radicals and we should also remember that Kraftwerk were making their first tentative moves towards electronics at the time. Though Nektar weren’t perhaps quite as extreme a proposition as any of that, they did attack their material with the kind of no-holds-barred spirit that possibly only Hawkwind could compete with, regarding UK bands at least.

Journey To The Centre Of The Eye was Nektar’s 1971 debut LP and it was followed up A Tab In The Ocean a year later. Both were issued in Germany, but 1973’s …Sounds Like This was the first collection released by the band in their home country. This was a concerted effort to captured Nektar’s on stage sound via live jamming and it is fitfully successful.

…Sounds Like This It gets off to a flying start with the slowly developing but gloriously realised Good Day, prime blissed-out pop for the prog generation that adds some fiery riffing. A chilled intro leads into New Day Dawning, which smartly works up a head of steam to set itself up as a powerful pop/rock number. We are reminded of the jamming roots of the album’s concept with a brief bit of The Beatles’ Norwegian Wood showing up midway through. The perfectly competent but standard blues rock of What Ya Gonna Do? completed side one of the original vinyl double album. In many ways it is a bit of a disappointment after the hugely impressive sound of the first two tracks of …Sounds Like This and it does feel a bit like filler.

A lengthy 1-2-3-4 filled most of the next side of the vinyl and it rests on the very funky pulsebeat it is endowed with. Eventually heavy guitars weave in and out and even though it is a fairly basic piece, Nektar’s sheer bravado helps to see it through the extended running time. Do You Believe In Magic? ups the ante considerably though, the tighter structure to the song benefiting the band enormously and helping to utilise their power and drive in an endearing fashion, before lengthy soloing picks out an ominous path to the finale.

We pass the midway point on the album with Cast Your Fate, a fairly laidback progressive sound that eventually becomes more dynamic. We then get a long three parter in A Day In The Life Of A Preacher, which begins with the country blues Preacher kicking things into gear nicely. Unfortunately the mid-section doesn’t add much apart from the various instruments getting a chance in the spotlight, though the following item Wings does help revive interest, delivering a snappy folk-tinged rock item.

The dreaded drum solo unfortunately shows up on the final track, the r&b based Odyssee. This is another three-part offering days and is at least partially redeemed by piling on the wah-wah and getting extra-funky afterwards. It is an odd thing to say about a progressive rock record, but one of the best things about …Sounds Like This is the danceable grooves that the band plough on with throughout.

The second disc of this set are the “live” jam album demos from October 1972 and February 1973. Sunshine Down On The City and It’s All In The Mind were cut from the demos when the …Sound Like This LP was released, but they are both restored here and Da Da Dum is extracted from Odyssee to become a track in its own right. Good Day fades in quietly and is slightly extended and full throttle, with New Day Dawning in this form being not too far off the finished articl. Perhaps this a little more manic and guitar-heavy, with a jangly coda. Thirteen minutes of Sunshine Down On The City add up to an expansive funk rocker which lurches about with some menac,e before a Doors-organ interlude resets the song earnestly.

Da Da Dum on its own comes over as a fairly ordinary blues rock thing, but does do a good job in bottling the lightning of Nektar’s relentless energy and What Ya Gonna Do? does pretty much the same, though it does sound a little wilder as a demo. It’s All In Your Mind glides past the ten minute mark on a cloud of sedate late-period psychedelia that is allied to true instrumental clout. It certainly wouldn’t have disgraced the LP proper. However, the very long Cast Your Fate Jam is a bit too much of a good thing and including another drum solo counts against it too. A slightly longer version of Wings ends this second disc and the set itself.

In many ways …Sounds Like This is a typical “jamming” rock album of the early 1970s, with Nektar having the added advantage of being able to drop in appealing pop/rock tunes too. The blues riffing takes a bit of the sting out of the tail of the LP to be honest, but there is enough here to convince one as to the band’s strengths. This is a pretty much a straight reissue of the 2014 Dream Nebula 2CD set, apart from the fact it has been newly remastered. The album comes over as a good prog rock record that stops just a little short of being great and the second disc does provide some keen insights. …Sounds Like This finds Nektar’s not quite at the top of their game, but not far from it.