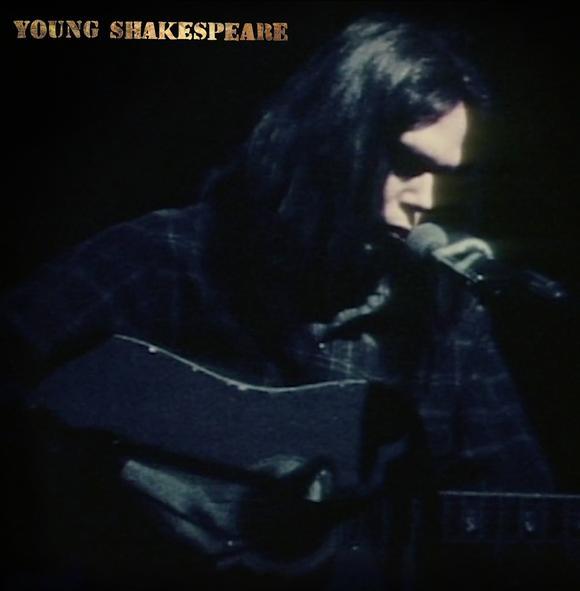 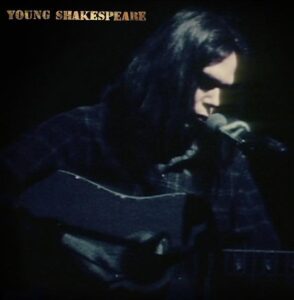 Neil Young’s best ever solo acoustic concert recording from early 1971 finally sees the light of day – on disc and DVD – half a century after it was recorded. 10/10.

At the venerable age of 75 Neil Young has every right to have spent lockdown kicking back, putting his feet up and, as his own song said, rolling another number. Perhaps he did. He’s also been on a literal journey through the past.

Young Shakespeare is the latest gem to be unearthed from his vaults: a pristine live recording of Young at his simplest and purest – just his voice, his acoustic guitar and his harmonica (and occasionally at the piano), recorded on his Journey Through The Past solo tour in early 1971. It’s spellbinding.

The album (and DVD) is the latest jewel to be uncovered in a frenzy of activity from Young. It arrives just one month after his 1990 Crazy Horse live album Way Down In The Rust Bucket; four months after his long-planned 10-disc Archive Vol.2; and nine months after his even longer-shelved Homegrown album from 1975, reviewed here in June 2020.

Young Shakespeare was recorded at The Shakespeare Theatre in Stratford, Connecticut, on 22 January 1971 and filmed for broadcast on German TV, making it the earliest known film of a solo performance. It took place three days after the previously released Live At Massey Hall – a more celebratory hometown show in Canada – and two months after the release of After The Gold Rush.

Young came across the 50-year-old analogue tapes while sifting through his huge archive for that recent box set during the pandemic. Piecing together the tapes and film footage, he realised he had the full concert in jaw-droppingly good sound and vision. Despite the obvious similarities to Massey Hall, Young himself believes this recording to be superior.

In his own words, it’s “A more calm performance, without the celebratory atmosphere of Massey Hall, captured live on 16mm film and lovingly restored from ancient analogue tapes. Young Shakespeare is a very special event. To my fans, I say this is the best ever.” It’s hard to disagree.

Offering an insight into just how prolific Young’s songwriting was in the early Seventies, the concert features two songs from the just-released After The Gold Rush – the opening Tell Me Why and Don’t Let It Bring You Down – and four from the forthcoming Harvest album that was still over a year away from being released.

Adding to the intimacy are Young’s guileless introductions, such as the moving monologue that precedes The Needle And The Damage Done, in which he describes discovering the ravages of heroin among the music community after he moved “down south” from his native Canada. It’s inspired (if that’s the word) by the addiction of his friend and Crazy Horse bandmate Danny Whitten, who would die the year the song was released.

An even longer introduction to Old Man describes Young’s initial encounter with Louis Avila, the elderly foreman of the Broken Arrow ranch he had just bought in northern California. The set list also includes acoustic renditions of favorites such as Ohio, the timeless protest song about the Kent State Shootings of the previous May originally sung by Crosby, Stills, Nash & Young, and a mournful, melancholy Helpless.

Young unstraps his acoustic guitar for a medley of A Man Needs A Maid and another unrecorded song, Heart Of Gold, apologising that he has only just learned the piano and may make a mistake – “but you’ve never heard it before anyway so you’ll probably think that’s the way it is.” It’s kinda mind-boggling to think that the audience were hearing for the very first time a song – two songs – that would go on to become standards. Listening to them being unveiled here is like watching gem stones slowly being polished before your very eyes.

By contrast, the stripped-back acoustic interpretations of Down By The River and Cowgirl In The Sand – better known as two sprawling epics from Everybody Knows This Is Nowhere, his 1969 proto-grunge album with Crazy Horse – bring an entirely new depth of feeling to the songs. Originally featuring freewheeling electric guitar solos of the kind that would come to define his wild and windblown signature style, they lose none of their primal power in an intimate acoustic setting, Young introducing Cowgirl as “hoedown music, something to stamp your feet and bang your hands to.”

It ends, in a fitting finale that underlines the innocence and purity of the performance, with a tender rendition of the oldest song in his catalogue, Sugar Mountain, a lament for lost youth that he wrote on his 19th birthday back in Canada in 1964. He describes how he originally wrote 126 verses for the song, struggling to strip it back to just four, and encourages the audience to sing and clap along “for William Shakespeare” – something for which they need no encouraging.