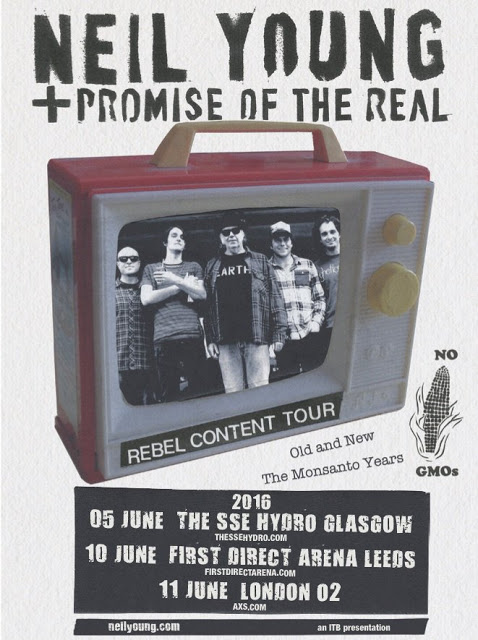 Rumour has it that it’s the old masters last European tour- perhaps not that likely given this showing. Joe Whyte was there for LTW.

I’m not a fan of enormodome gigs- I rarely, if ever, go to these soulless type of things. Circumstances prevailed however. A good friend donated me a couple of tickets (she’d bought them forgetting she was abroad on holiday- as you do….) and it was Neil Young ferchristsakes. I’ve been a fan since way back; I think it was hearing Like A Hurricane in all of its lengthy glory in a mates’ flat in the midst of post-punk that did it. That song sparked a decades-long hunt for every record previously released by Young and a lifelong fascination with the enigmatic Canadian. It’s been a bumpy road for sure; for every career-defining high like Ragged Glory down the years there’s been several lacklustre and mistimed releases. Young is a guy who couldn’t care less, however; he’s a true artist and does whatever the hell he pleases, like it or not. With a back catalogue like his, there’s few that would complain about him experimenting and following his muse. Unfortunately, it’s heralded as many false dawns as it has interesting releases in recent times.

I’d never actually seen Neil Young live before and was oddly glad of the fact. Ongoing reports over the years tell of of tours where he ostracised large swathes of audiences by willfully refusing to play the entertainer game. If you were daft enough to buy a Young ticket in the last few decades hoping he was going to play Heart Of Gold and Harvest as well as other “hits” you’d be probably wasting your time and money. Young is as likely to spend half the set hunched over that wheezing, asthmatic pump organ playing his current album than smiling at the kids and bowing to pressure to play the well-known material. Alternatively, he’d play an electric set that would comprise lengthy jams around the songs more often than not punctuated with coruscating blasts of feedback and solos. Fans of the man are well aware of this and know him and love him for this very reason; he defies expectations, he never plays the corporate rock game and he does as he damn well pleases. He’s Neil Young. He’s earned the right.

Reports online suggested that perhaps this was Young’s last gasp of a tour outside of the USA; he is 70, after all. Reports had also suggested that he was playing the “hits” with this young band in tow and that this was probably a last chance to see him for many fans overseas. Whether that had garnered a more-than-usual interest I’m not sure, but events were to suggest that there’s plenty of life left in the old dog yet.

Anyway, nursing a venue-sized hangover, I make my way to the Hydro which sits on the banks of a sun-dappled Clyde. Entering the cavernous hall and being directed to our seats by the very pleasant staff, I can’t help but notice the merch stalls; advertising “unbleached cotton, eco-friendly t-shirts” is all very well, but twenty-five quid? Seriously? Someone is taking the piss. While I’m on a rant, what the hell is a booking fee of £8.80 per ticket all about? These were booked online where the customer enters all of their own details- why do these rip-off merchants think it’s acceptable to charge that sorta dosh for someone doing all the work for them? Anyway, the tickets were gifted to me so I shouldn’t complain. But I will.

We don’t have to wait long for the lights to drop; a roar that shakes the foundations gives lie to the advanced ages of many of the audience. Prior to Young’s arrival, a couple of guys dressed as farmhands a la Grapes Of Wrath enter stage left and proceed to scatter seed around the stage and into the audience; they have torches strapped to their heads as perhaps a nod to the “Road Eyes” of the Rust Never Sleeps era. A few songs into the set, another group of “extras” in Haz-Mat suits appear with chemical spraying equipment and blow the seeds away. That’s it as far as production values are concerned- Young and his band play under a set of fairly standard white lights with little to dazzle the eyes or amaze the synapses of those sat in the banks of seating above the main arena.

A solitary light picks out the black clad, stick thin figure under his battered fedora as he sits at an upright piano that has the look of an antique that’s been wheeled out of Young’s barn. His face is barely visible under the brim and it gives an added edge of enigma that Young already has in spades. As the opening notes of After The Goldrush cascade from his fingers, an exultant swell of approval sweeps across the auditorium. The voice is unmistakable and unfettered by age; he’s become these songs over the years. As he gingerly steps centre stage to be strapped into a wrecked-looking acoustic, he says little. In fact, he says little throughout the two and a half hours he is with us. A couple of “How ya doin’ out there?”‘s suffice for chatter. The chords of Heart Of Gold ring out and there’s a palpable sense of sheer amazement in the crowd. The follows this with the Needle And The Damage Done and Comes A Time and it seems that, despite all the previous refusals, Young is here to play to the crowd. He’s back at the pump organ for Mother Earth  and its deathly wheeze leaves the audience suitably hushed.

Promise Of The Real join Young on stage for the remainder of the evening; they’re a young bunch who are taking distinct joy in playing with a guy they clearly consider to be a hero. The drummer (who doesn’t have a vocal mic) is visible on the huge “TV” screens side stage gleefully singing every word of Out On The Weekend behind Young. It’s a hugely sweet moment. They’re three guitars strong (including Neil) and remind me of The Drive By Truckers in their carefree naivety as  the bassist bounces on his Chuck Taylor soles and thunders the bottom end of the songs. The guitarist stage right is kilt-clad, presumably for the occasion although matching it with a red check lumberjack shirt is a bit of a fashion faux pas. Nonetheless, he and his counterpart on the other side are perfect foils for Young, letting his guitar soar (he’s using a Gretsch not unlike his Buffalo Springfield guitar at this point) when required and taking leads Crazy Horse-style as need be. Unknown Legend from “Harvest Moon” is controlled and blistering in equal measure. Words from the gazillion-selling “Harvest” is equally enthralling with the bands ascending backing vocals taking the song interstellar. Alabama from the self-same album is quite simply giant.

Another huge roar as Young straps on “Blackie”, his beat-to-shit Gibson Les Paul. That roar is dwarfed by the one that greets the opening chords of Down By The River. It’s 19 minutes long (I timed it) and is a sheer lesson in guitar playing. The band switch parts, solo through each other and trade licks like they’re having the time of their lives. They probably are. Young is throwing shapes like a man half his age and the years roll away as he flings his guitar (which still has that ragged strap from the 70’s with the barely-visible-now Native American symbols on it) around as he wanders around the band members. If you’re not a fan, I’d imagine 19 minutes of this may be a bit much; there was a few people heading for the loos and bars around this point. More fool them. As it turned out, DBTR was one of the briefer songs in the latter part of the set.

A paint-stripping Mansion On The Hill preceded a couple of more recent tracks and a lengthy Monsanto grew wings as it built to a crescendo of noise and several false endings. Crazy Horse classic Love And Only Love was hitting the thirty-minute mark before it concluded. I have to be honest and admit I was wearying somewhat of the endless solos by this point. There comes a time (see what I did there?) when it becomes guitar wank for the sake of guitar wank and it was pretty dull after the first 15 minutes. Other people will disagree, but I was definitely approaching solo-overload by this point. The encore was a garage rockin’ Fuckin’ Up (one of several tunes from Ragged Glory) and safe to say, Neil Young took it apart and rebuilt it in familiar style.

It’s not often you are in the presence of genius and greatness, but for long, long periods of tonight, we were.