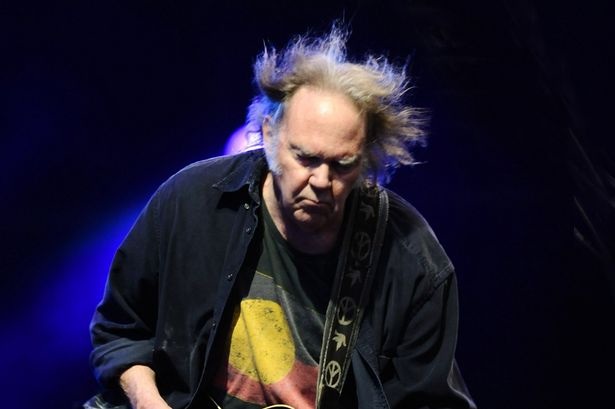 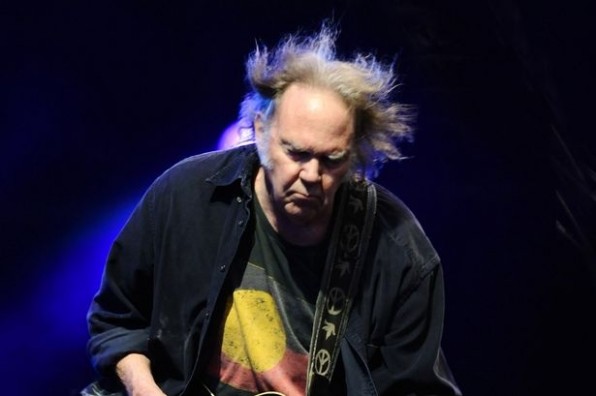 Neil Young and Crazy Horse are in the middle of a huge tour at the moment, one which included their first show in Liverpool since 1975 last night. Was it worth the wait? By the sounds of it, hell yeah!

As well as being one of the most influential outfits of all time, Neil Young and Crazy Horse must also rank as one of the most accident prone. I remember way back in the long lost summer of 1998 getting all excited at the prospect of watching his set at Glastonbury, only for him to pull out at the last minute due to an accident involving a knife and a ham sandwich (we got Bob Dylan instead, which wasn’t a bad replacement I suppose). Last year I remember my excitement at purchasing tickets for his show at the Liverpool Echo only for THAT dream to be dashed too, thanks to guitarist Frank ‘Poncho’ Sampredo breaking his hand! This year Billy Talbot pulled out after suffering a stroke, but has been replaced with long-time Young collaborator Rick Rosas on bass.

I’m in tow with my uncle, Steve, a diehard Young fan who has been obsessively listening to his music since 1973. He’s never seen him perform live before (missing out on his last gig in Liverpool, part of 1975’s Tonight’s The Night tour), so it’s fair to say there is a large amount of excitement and trepidation surrounding tonight’s event. Will he live up to our expectations, having let us down in the past? Will this be worth the agonisingly long wait? Let’s hope so…

I only caught the end of former Icicle Works frontman Ian Mcnabb; a good humoured, well received set that he is clearly relishing every second of! A splendid trio of  ‘Evangeline’, Rod’s ‘I Don’t Want To Talk About It’ and an atmospheric ‘Little Princess’ perfectly mirrors the mixture of excitement and anticipation bubbling under the roof of the building. New York’s The Last Internationale are on next, a politically charged blues / rock / cowpunk outfit. Frontwoman Delila Paz is a born performer blessed with a great voice, but unfortunately the music they play is a little generic and repetitive. Not awful, just not great. When the rest of the band start reflecting the undoubted talent of Ms Paz within their music a little more they will probably be unstoppable. As for now, they’ll just have to settle for a comfortable career of perpetual support act, ‘second best’ status. File under ‘must try harder.’

It’s been said before that Neil Young is one of those artists who doesn’t give a fuck what people think of him, and there’s clearly some truth in this. Dressed down in a black ‘Earth’ t shirt and flat peaked black cap, he makes little or no concessions to conventional showmanship, preferring to launch straight into a 12 minute ‘Love And Only Love’ followed by a similarly long ‘Goin’ Home’, epic guitar workouts clearly intended for the many diehards out in their hordes tonight. This is the kind of attitude non believers are quick to dismiss as self indulgence, when in fact it’s anything but. Burning underneath the supposed crankiness is an often overlooked eccentricity and sense of humour, he’s playfully toying with the audience in order to see exactly how much we are prepared to let him get away with. Thankfully, it’s clearly a committed set of fans tonight (I heard of his apparent annoyance at large sections of the Hyde Park crowd shouting out for the hits); we are, he assures us in his own words, “a good audience. A little ugly, but a good audience.” Good to know, Neil!

We are just a few feet away from the stage, in the standing area of the Echo Arena. Witnessing a full band version of ‘After The Goldrush’, complete with female backing vocalists, is an undeniably magical, unforgettable moment; sounding like a long lost hymn from another planet, with its haunting lyrical imagery of spaceships and knights in armour. My uncle’s personal favourite section of the show was the double whammy of ‘Don’t Cry No Tears’ and ‘Barstool Blues’ from 1975’s Zuma, although sadly no ‘Cortez The Killer’ (the first grunge anthem?) tonight. Other highlights include ‘Heart Of Gold’ (but of course), the title track of 2012’s ‘Psychedelic Pill’, a rock / garage-pop stomper complete with some nice ‘flower power’ stage lighting, and ‘Rockin’ In The Free World’, sounding ever more defiant and anti-defeatist; a rousing, grizzled battle cry in an increasingly consumerist, profit driven world.  The only real disappointment arrives with the cover of Dylan’s ‘Blowin’ In The Wind’. Honestly, does Neil Young, a man with such a vast oeuvre, expansive back catalogue and rich tapestry of work, really need to play Blowin’ In The bloody sodding bastard Wind??! It’s a perfectly nice song, even an important one, but quite frankly there are probably thousands of buskers who have been labelled passe for including this little number in their set, why not play ‘Harvest’ or ‘You and Me’ or ‘Needle And The Damage Done’ (amongst many others) if you fancy doing an acoustic number? Beggars belief…

A 14 minute ‘Like A Hurricane’ provides us with a suitably fitting encore, complete with a cardboard figure adorned organ suspended by strings and climaxing with Neil shredding the strings of his guitar (“a good way to let everyone know you’re not coming back on” in the words of my uncle!) A great set on the whole; wonderful atmosphere provided by people who clearly cared about the music, a rare chance to see a living legend perform on home soil, and, more importantly, a fantastic show which never once loses your attention. An anti-performer you cannot take your eyes off for a second, surely that’s a skill in itself? It helps, of course, if you have the songs to back up the stance, and Neil has them in droves.

All words by Sean Diamond, find his Louder Than War archive here.